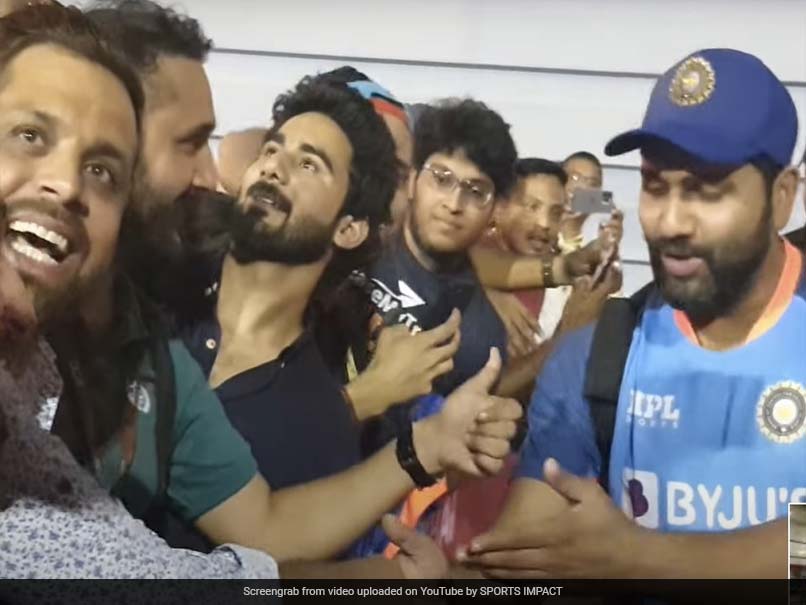 Rohit Sharma played a quick-fire 16-ball 28 on Sunday against Pakistan in a Super 4 clash at the Asia Cup. The Indian cricket team captain then rotated his bowlers well and took the match till the last over. However, India ultimately failed to defend a 181-run total against Pakistan. After the match, Rohit Sharma could be seen meeting fans and spectators outside the Dubai International Stadium. One of the fans, kept holding on to Rohit's hand, leading to the India captain saying: "Arey Haath Toh Choro"

In the match, chasing a tough target of 182, the ever-dependable Mohammed Rizwan (71 off 51 balls) anchored the Pakistan innings but it was left-handed batter Nawaz, known more for his orthodox left-arm spin, who played the decisive knock of the match. His 42 off 20 balls was something that India didn't factor in and there was no gameplan for him as Khushdil Shah and Iftikhar Ali completed a deserving victory with a ball to spare. The Rizwan-Nawaz partnership of 73 in just 6.5 overs in the mid-stage of the innings had the Indians napping.

Yuzvendra Chahal (1/43 in 4 overs) and Hardik Pandya (1/44 in 4 overs), the two bowlers who were brilliant last Sunday against Pakistan, were pedestrian on the day as Nawaz took both of them to cleaners. The 87 that came off their cumulative eight overs turned the match in Pakistan's favour as Nawaz hit six fours and two sixes.

While Pandya's short-ball tactic fell flat, Chahal was taken to cleaners by both Rizwan and Nawaz as creases on Rohit Sharma's forehead increased with each passing over.

By the time Nawaz was holed out in the deep off Bhuvneshwar Kumar's bowling, he had inflicted enough damage on the psyche of the Indian attack.

Pakistan Cricket Team Asia Cup, 2022 Cricket
Get the latest updates on Fifa Worldcup 2022 and check out  Fifa World Cup Schedule, Stats and Live Cricket Score. Like us on Facebook or follow us on Twitter for more sports updates. You can also download the NDTV Cricket app for Android or iOS.