India pacer Mohammad Shami has come out in support of Arshdeep Singh who is being trolled on social media for the dropped catch, asking him to just focus on the upcoming games.

India pacer Mohammed Shami has come out in support of young seamer Arshdeep Singh, who is being subjected to criticism on social media after dropping a catch against Pakistan in the Asia Cup Super 4s match on Sunday at the Dubai International Stadium. Arshdeep dropped the catch in the 18th over of the innings and hence Asif Ali got a life. In the end, Pakistan walked away with a five-wicket win.

Now, India pacer Mohammad Shami has come out in support of Arshdeep Singh, asking him to just focus on the upcoming games.

On his Instagram Story, Shami wrote: "Don't worry @_arshdeep.singh_ we are with you. Focus on your upcoming games, don't look and listening them." 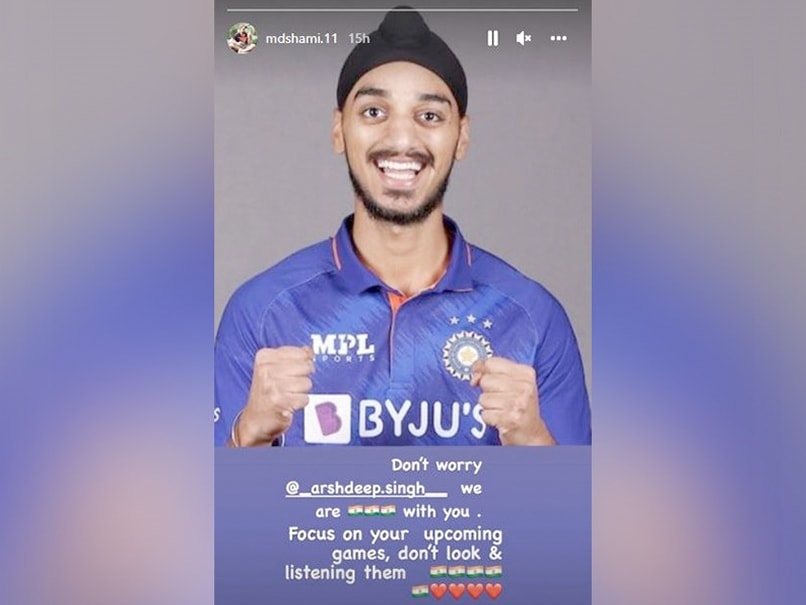 It is important to note that even Shami was trolled last year after India suffered a defeat against Pakistan at the T20 World Cup in the UAE.

The biggest talking point of the game between India and Pakistan on Sunday came in the 18th over of Pakistan's innings as young seamer Arshdeep Singh dropped a relatively easy chance off the bowling of Ravi Bishnoi and Asif Ali got a reprieve. Arshdeep then came on to bowl the final over, but he was not able to defend seven runs, and in the end, Pakistan walked away with a victory.

Speaking at the post-match press conference, India batter Virat Kohli showed his support for Arshdeep, saying mistakes can happen from anyone in high-pressure games: "Anyone can commit the mistake, the situation was tight. It was a high-pressure game and mistakes can happen. I still remember I was playing my first Champions Trophy and the match was against Pakistan, I had played a very bad shot against Shahid Afridi."

"I was watching the ceiling till 5 am, I was not able to sleep and I thought my career is over but these things are natural. Seniors players get around you, there is a good team environment right now, I give the credit to the captain and coach. The players learn from their mistakes. So one must accept his mistake, address it and look forward to being in that pressure situation once again," he added.

Mohammad Shami Arshdeep Singh Asia Cup, 2022 Cricket
Get the latest updates on Fifa Worldcup 2022 and check out  Fifa World Cup Schedule, Stats and Live Cricket Score. Like us on Facebook or follow us on Twitter for more sports updates. You can also download the NDTV Cricket app for Android or iOS.