Goals from Harry Maguire and Dele Alli and a string of fine second-half saves from goalkeeper Jordan Pickford were enough for England to progress to the last four. 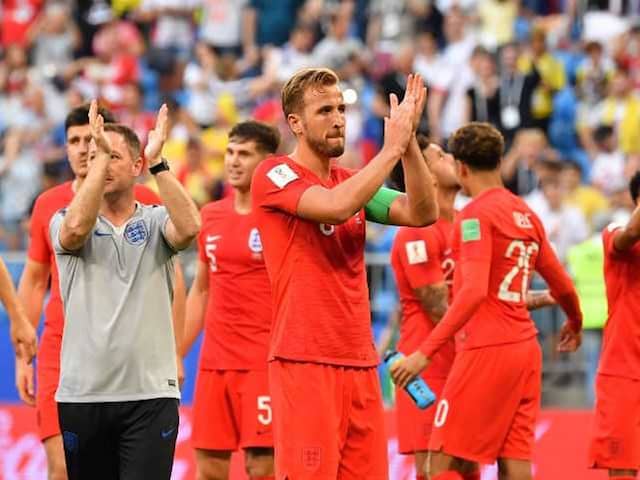 Harry Kane said the feeling of reaching the World Cup semi-finals had not sunk in.© AFP

England captain Harry Kane said his team were "buzzing" and full of confidence as they reached their first World Cup semi-final since 1990 after seeing off Sweden 2-0 on Saturday. Goals from Harry Maguire and Dele Alli and a string of fine second-half saves from goalkeeper Jordan Pickford were enough for England to progress to the FIFA World Cup 2018 last four. "We're buzzing. It's probably not sunk in," Kane said. "We know there is still a big game ahead but we are feeling good, confident. "We were composed, we controlled the game. We've just got to keep doing what we are doing.

Maguire's thumping header gave the Leicester centre-back his first international goal, just two years after watching Euro 2016 in France with his friends in the stands.

"It (the first goal) can't come better than that. The win sends us through and that's the main thing," Maguire said.

"We felt like we could dominate the ball in this game. It was a little bit sloppy at the end of the second half, we felt it was a bit too open."

Tottenham midfielder Alli nodded in only England's third goal from open play of this World Cup so far just before the hour mark, having struggled with injury earlier in the tournament.

"It's a great achievement for the team... Owed it to the fans back home who believed in us," he told the BBC.

"Always nice to score, especially on occasions like this. I don't think this was my best performance on the pitch. But it's an amazing feeling to be going to a semi-final at a World Cup."

Sweden Harry Kane Harry Maguire Dele Alli 2018 FIFA World Cup Sweden vs England, Quarter-Final 3 Football
Get the latest Cricket news, check out the India cricket schedule, Cricket live score . Like us on Facebook or follow us on Twitter for more sports updates. You can also download the NDTV Cricket app for Android or iOS.