World Cup 2018: Sweden Hit Out At Germans For 'Rubbing It In' With Celebrations

Germany were in real danger of a group-stage exit from the tournament, with a draw only likely to give them a temporary reprieve, until Kroos curled in a 95th-minute free-kick to take the points. 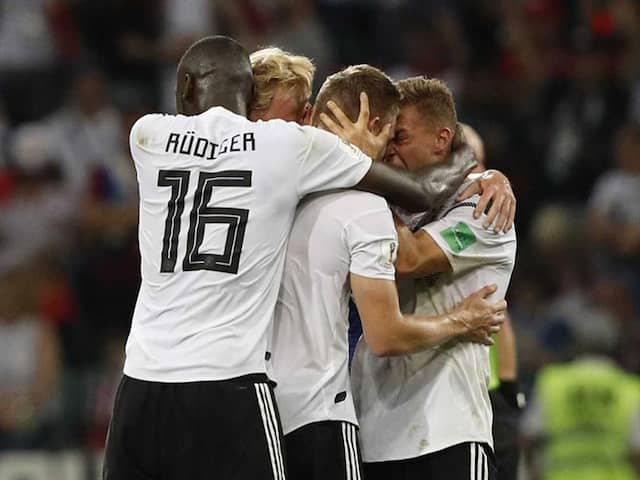 Fuming Sweden coach Janne Andersson accused Germany of "rubbing it in our faces" as they celebrated the dramatic late goal from Toni Kroos that gave them a 2-1 win in their crucial World Cup clash here on Saturday. Germany were in real danger of a group-stage exit from the tournament, with a draw only likely to give them a temporary reprieve, until Kroos curled in a 95th-minute free-kick to take the points. The World Cup holders then set off to celebrate wildly, having come from behind in the Group F encounter at Sochi's Fisht Stadium, but their behaviour provoked anger on the opposition bench.

"Some of Germany's leaders celebrated by running in our direction and rubbing it into our faces. That got me angry," said Andersson.

"We fought it out for 90 minutes and when the final whistle blows you shake hands and you leave so I was very angry with that."

Ola Toivonen's goal had given Sweden a first-half lead, but Marco Reus equalised early in the second half.

Even a draw would have left Germany needing to win their final game against South Korea while hoping the Swedes lost to Mexico.

But suddenly Joachim Loew's team -- who had Jerome Boateng sent off late on -- have their fate in their own hands again, while Sweden have it all still to do.

The Scandinavian side, though, were also unhappy at not being given an early penalty when Marcus Berg was fouled in the area by Boateng on the point of shooting.

"We played excellently and scored a beautiful goal. We won't cast any blame but we have spoken to those who say it was a penalty on Berg, and that is maybe what we needed against a team like Germany," said Andersson, who was unhappy that the Video Assistant Referee did not intervene.

"If we have the system it's very unfortunate that (the referee) doesn't feel he can go and have a look. If that's his decision we have to live with it."

He added: "The whole group is still alive so we will have to lick our wounds and come back for the last game."

Sweden Germany vs Sweden, Match 29 2018 FIFA World Cup Toni Kroos
Get the latest Cricket news, check out the India cricket schedule, Cricket live score . Like us on Facebook or follow us on Twitter for more sports updates. You can also download the NDTV Cricket app for Android or iOS.