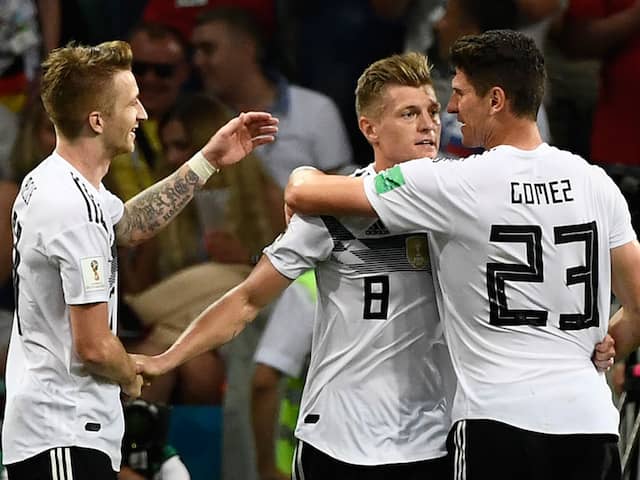 Toni Kroos hit a perfect curling free kick as the Germans saved their noses to stay alive in the FIFA World Cup 2018 edging past Sweden 2-1. Kroos scored the winner in the added time as a classic Germany clinched home a victory after their loss to Mexico in the inaugural fixture. Germany played a dominating first-half of football only to trail by a goal to Sweden. The Swedes produced a moment of inspiration through Ola Toivonen to edge the Germans in the opening 45 minutes. The Germans, however have been a live wire in terms of possession, shots on goal but the scoreline did not reflect their story as their shots were well blocked by the Swede -- who did well to keep the Joachim Loew-managed side away from scoring. Earlier, Mesut Ozil was dropped for Germany's must-win World Cup clash against Sweden in Sochi on Saturday. The much-criticised Arsenal playmaker drops out as coach Joachim Loew makes four changes to the side that lost 1-0 against Mexico in the opening game of their trophy defence last weekend. (Highlights: Germany vs Sweden).

01:25 IST: Thank you for staying with us for the live match updates.

01:22 IST: Toni Kroos on a free-kick, on the edge of the box and he scores! What a goal, as Kroos gets one touch assist from Marco Reus! Referee blows for the final whistle, what a dramatic end to the high intensity drama, classic Germany kept their nerves to seal the deal!

01:19 IST: Timo WERNER! Hits the post in the second minute of the injury time from the edge of the box, Sweden survive!

01:18 IST: 5 minutes added! Swedes clearing and defending every ball coming their way, they might well think their job is done. But Germans earn a corner in injury time.

01:16 IST: Chance! Mario Gomes comes close to scoring with a near header but Robin Olsen nips it away, crucial save and quite likely looks like the save of the tournament, thus far. What a save in the dying minutes!

01:13 IST: 10-man Germany continue to be dominant on the ball. Mueller crosses a ball in bit Forsberg tucks it away. Meanwhile, Germany has replaced Hector with Brandt in the 87th minute.

01:09 IST: RED CARD for Jerome Boateng -- the heart of the German defence has been sent off for a rash challenge on Marcus Berg, as he collects his second yellow with nearly 8 minutes plus added time to be played.

01:08 IST: Mueller with a brilliant ball inside the box, finds Timo Werner but the youngster skies the ball. Germans have failed to make the most of the chances they have created. 81 minutes on the clock!

01:03 IST: Corner for Sweden, German header tucks it away as it falls for Forsberg who takes an attempt on target but Manuel Neuer is behind to collect it.

01:01 IST: Sweden has brought on a pair of fresh legs -- Durmaz comes off the bench in place of Claesson in the 74th minute.

00:59 IST: Free-kick for Germany, Toni Kroos swings it to the right flank to find Joshu Kimmich, turns out to be a throw-in for Germany.

00:55 IST: Off-side! Boateng chips in a brilliant ball to find Gomes -- who skies the ball high from close range, he will be relieved with the decision from the assistant referee. Germans continue to impose threat.

00:54 IST: Berg, meanwhile keeps hold on the ball for Sweden. Germany for seconds did the chasing work before the ball falls back to their feet again.

00:52 IST: Corner for Germany, Kross delivers a swinging ball to no one in particular as the firm Swede defence shrugs off the danger.

00:51 IST: Toni Kross with a brilliant shot from the 20-yard mark but the his shot is blocked as Sweden continue to play inside their own half, 63 minutes says the clock!

00:47 IST: Sweden suddenly look to keep control on the ball, but the Germans are back in the attack. Kimmich makes a brilliant cross but Reus trips and fails to get the crucial touch.

00:44 IST: Gundogon on the right flank, plays a ball to find Muller but he can't reach there, kept away by the Swede defence. Time is ticking, 57 minutes up!

00:35 IST: GOAL! Veteran Marco Reus tucks it in the back of the net from a cross delivered by Timo Werner in the 48th minute. It's all square now! He has surely shut some critics now, who reportedly has issues over his selection.

00:32 IST: Second-half gets underway, Mario Gomes replaces Julian Draxler as they get the ball rolling.

00:18 IST: Half-time Germany 0-1 Sweden. The holders have been dominant on the whole, but Sweden generated one inspirational moment which is the difference between both the sides after the 45 minute mark. Meanwhile, a group stage knock-out hovers over the holders mind! The scoreline does not reflect the real story of the match, thus far.

00:15 IST: Germans back on the attack, but getting their shots blocked has been the problem all day long, so far for the Germans. 2 minutes added in the first-half!

00:01 IST: Bleeding Rudy throws his shirt away in disgrace in the dug-out as he has been substituted by Gundogan

23:58 IST: Corner for Sweden, tipped away by the Germans. Rudy still in the dug-out with a cotton on his bleeding nose as Sami Khedira has been asked to warm up in the 29th minute.

23:56 IST: Looks like a certain shirt change for Rudy, due to the blood caused of the hit he took on the face.

23:53 IST: Corner for Germany, Toni Kross delivers Larsson over to guide it away. Germany retain possession but looks Sebastian Rudy has done himself some damage near the 25th minute.

23:48 IST: Shot from Marcus Berg! Boateng blocks it, Germany return on the counter as Sweden open up space, nearing the 18th minute mark.

23:42 IST: Through ball from Sweden, opens up space for Marcus Berg, Jerome Boateng makes a rash challenge on the Swede, worth of a penalty, but the referee does not thinks alike, drama!

23:39 IST: Short corner taken by Germany in the 9th minute -- Reus, Draxler combine, Boateng makes a long pass to Hector but he fails to keep the ball in play.

23:36 IST: First sign of Swede attack as they try to break on the counter but Forsberg fails to get his footing right, loses the ball. Mueller looks to have got away with pulling Forsberg's shirt here, rather!

23:35 IST: First five minutes up on the clock -- shots, attack, possession, dominance, it has been all Germany so far!

23:33 IST: Germany has set the tone, Draxler misses an early chance from close-range. Swedes have been pushed on the back foot. Complete domination from the World Champion.

23:31 IST: Cross from Thomas Mueller, fails to find a target man inside the box. The holders comfortable in early possession.

23:30 IST: Kick-off, the Swedes get the ball rolling from left to right and straight on Germans have taken the ball control.

23:25 IST: National anthems, pre-match rituals underway, starting with Germany followed by Sweden as we inch closer to the crucial kick-off.

And so, to our final match of the day...

22:15 IST: Here is how the Germans have lined-up for the crucial clash.

22:10 IST: German fans trying to bind time ahead of the do-or-die clash of the holders against Sweden, as we are just over an hour away from the kick-off.

21:30 IST: Hello and welcome to the live commentary from the Group F match between holders Germany and Sweden.

Bayern Munich defender Hummels and his international teammates are well placed to comment on Forsberg's ability.

The 26-year-old has come to Russia on the back of two outstanding seasons in the Bundesliga with RB Leipzig, and on Saturday evening, at the Fisht Stadium by the Black Sea, he will come up against a German side featuring his club colleague Timo Werner.

The Germans came early to Sochi to acclimatise to the heat as they look to stave off talk of a crisis following their 1-0 defeat to Mexico, with which they began their trophy defence.

Sweden Football Live Score 2018 FIFA World Cup Live Blogs Germany vs Sweden, Match 29 Football
Get the latest Cricket news, check out the India cricket schedule, Cricket live score . Like us on Facebook or follow us on Twitter for more sports updates. You can also download the NDTV Cricket app for Android or iOS.