Neymar limped out of a training session with a sore right ankle following Brazil's opening 1-1 draw with Switzerland last weekend. 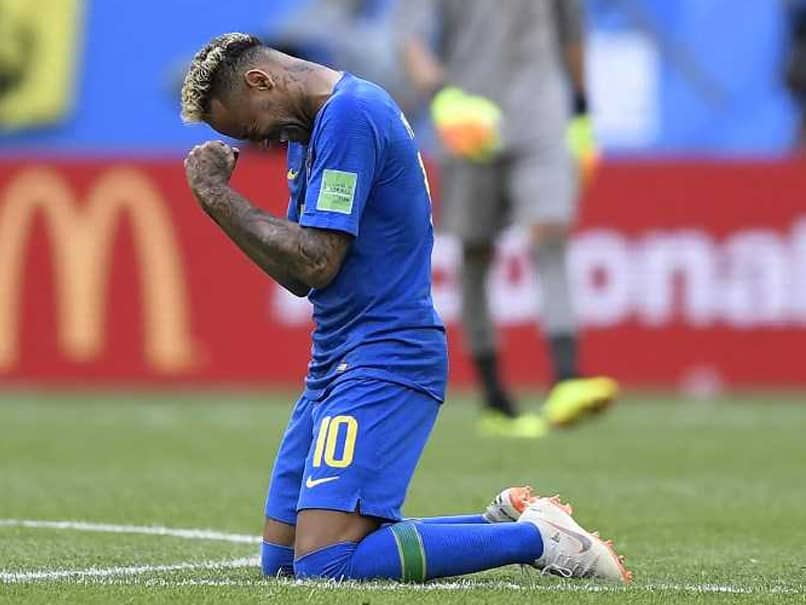 Neymar reacts after scoring a goal against Costa Rica.© AFP

Neymar has now "totally recovered" from the foot injury that required surgery and saw him miss the end of the club season, Brazil's team doctor said on Saturday. However, winger Douglas Costa will miss the side's final World Cup Group E outing against Serbia on Wednesday. "I would like everyone to understand Neymar's situation, and that he no longer has any problem with his right foot," Rodrigo Lasmar told journalists at Brazil's World Cup training base in Sochi. "He has totally recovered but he is still building up his rhythm and his confidence. He is feeling better with every game." Lasmar sought to reassure Brazilian media worried about Neymar's fitness after he limped out of a training session with a sore right ankle following Brazil's opening 1-1 draw with Switzerland last weekend.

That raised fears, particularly as it was just above the foot that he fractured playing for Paris Saint-Germain in late February, before undergoing surgery. He did not start a game again until Brazil's final World Cup warm-up friendly in Austria two weeks ago, and he took a further knock on the left ankle in Friday's 2-0 win over Costa Rica. Despite that, he was still on the pitch to score his team's late second goal in Saint Petersburg."The problem with his left ankle is not something that worries us. Tomorrow he will train normally with the rest of the players," said Lasmar.

The Brazilian camp were unhappy with the treatment Neymar received in the Swiss game, when statistics showed he was fouled 10 times. And Lasmar reiterated those complaints. "Opponents commit fouls to try to stop him," he said. "We expect the refereeing to contain that. I am not specifically talking about the risk to Neymar. Fouls can happen." Juventus winger Costa will not be able to face Serbia in Moscow due to a thigh problem suffered after coming on as a half-time substitute against Costa Rica.

Philippe Coutinho and Neymar both scored in stoppage time for Brazil, who now need only draw with Serbia to secure a place in the last 16.

Costa Rica
Get the latest updates on India vs England Series, India vs England , live score and IPL 2021 Auction . Like us on Facebook or follow us on Twitter for more sports updates. You can also download the NDTV Cricket app for Android or iOS.