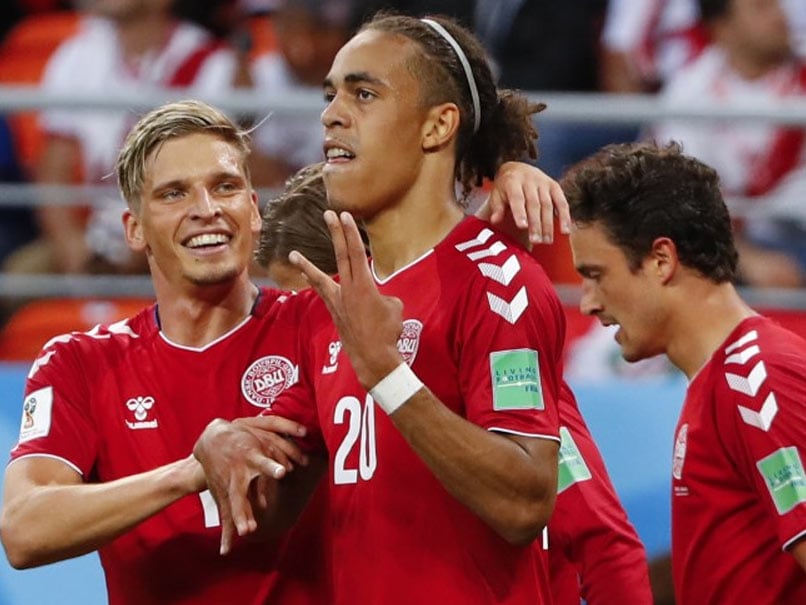 Yussuf Yurary Poulsen scored the lone goal of the match as Denmark beat Peru by a slender 1-0 goal in an evenly poised fixture at the Mordovia Arena in Russia on Saturday. For Peru, Christian Cueva missed the penalty in the first half as he skied the ball from the spot as both Peru and both the side remained goalless in the first-half. Peru came the closest to take the lead after the VAR overturned the initial decision of the referee. Meanwhile, Denmark who showed slight glimpse of controlling the midfield, failed to find the back of the net as they lacked composure in the game. However, both the managers will have to make some changes in the side to find penetration and get better off the opposition. (Highlights: Peru vs Denmark)

23:24 IST: FINAL WHISTLE! Yussuf Yurary Poulsen scores the lone goal of the match as Denmark beat Peru by a slender 1-0 goal in an evenly poised fixture.

23:19 IST: 5 minutes added! Denmark looking to hang in there, Carillo has been terrific for Peru down the wings but he has failed to get the combination right.

23:16 IST: 88th minute, Peru still trying to get the breakthrough, combing well, going all-out but the Danish maintaining a strong back line to clear everything that comes there way.

23:12 IST: BLOCKED! Farfan denied by Denmark goalkeeper Schmiechel, the kick-taker was in space, unmarked as Kasper tucks the ball away with his right foot in the 83rd minute.

23:08 IST: Back heel from Guerrero from the box, clever after Cueva passed him the ball which drifts past the post by a whisker in the 79th minute.

23:06 IST: Peru has put Denmark on the back-foot. Understandable given the score-line. But the Peruvians are failing to find a penetration.

23:02 IST: CORNER for Denmark! Eriksen makes a poor delivery, off the rebound he delivers again inside the box, cleared away in the 73rd minute.

22:57 IST: Free-kick for Peru! Denmark gets the last stitch defending as Farfan fails to head the ball in the near corner in the 68th minute. Denmark escape!

22:53 IST: Substitution! Guerrero replaces Flores in the 62nd minute. The former will have a last shot on the World Cup after making it to the side following a drug-ban controversy.

22:50 IST: SAVE! Kasper Schmeichel denies Peru an equaliser in the 60th minute from a shot taken by Cueva which was left to curl in the back of the net.

22:48 IST: GOAL! Denmark breaks the deadlock on the counter-attack, Peru will be kickick themselves for allowing too much space. Eriksen passes the ball to Yurary who finishes it in the far corner in the 59th minute.

22:44 IST: Great Chance for Peru! Trauco finds space, dribble it past the Danish defence but Flores trips as he fails to get take a shot on the goal.

22:41 IST: Free-kick taken Eriksen from the right side of the box, driven in by pace the ball has been shot away for a goal kick in the 53rd minute.

22:40 IST: Peru had nine shots on goal so far in comparison to 6 from Denmark. Peru has been able to mark Christian Eriksen well and keep him silent, thus far.

22:35 IST: Second-half gets underway! Both the sides will be looking to break the deadlock .

22:17 IST: TRIVIA: Only one penalty was missed in the 2014 World Cup, we have seen two in a day now from the South Americans. At the halfway mark it is Peru 0-0 Denmark.

22:14 IST: VAR reviews and penalty has been awarded to Peru, referee's initial decision has been over-turned in the 43rd minute for a foul over Christian Cueva inside the box.

22:08 IST: 38' - Free-kick for Denmark! Christian Eriksen takes it from the edge of the box, hits the seven-man Peru wall, Denmark tries to hit on the re-bound, collected by the Gallese after a short fumble.

22:04 IST: 34' - Denmark keeping the ball better, making waited passes, controlling the midfield well but both the sides have lacked penetration.

22:01 IST: 31' - Farfan uses his body strength to nudge away from the Danish defence but fails to make the most chance. Meanwhile, Kvist has a slight niggle after been taken down.

21:56 IST: 26' - SHOT! Delaney looks ambitious, steams in and takes a shot from the 30-yard mark which only rises high above the cross-bar.

21:54 IST: 24' - Corner for Denmark! Christian Eriksen takes it, he will re-take it. Cleared away twice by solid Peru defence which was gathered back by Denmark but Eriksen hit it wide, nowhere near the goal, fails to find his team-mate.

21:52 IST: 22' - Denmark on the attack combing well, cleared away by Ramos in the Peruvian defence.

21:50 IST: 19' - Peru holding high back-line, pass easily cut away from Danish forward Sisto who was inside the box looking to find his team-mate.

21:46 IST: Christensen marshaling the defence for Denmark, which is continuously put on test by Peru. Denmark get their first corner in the 17th minute.

21:44 IST: First Corner of the game in 13th minute to Peru - Peru captain Rodriguez was ahead for the corner which has been headed wide for a Danish goal-kick.

21:42 IST: EARLY STATS! Peru had four shots on goal so far in comparison to none from Denmark.

21:36 IST: 6' - Carrillo on the right flank for Peru, shows pace finds Cueva in the centre, passes the ball and shot is safely collected by Schmeichel.

21:35 IST: 5' - End to end play! Both teams are looking to attack, end-to-end play so far. No possession or midfield control evident yet.

21:34 IST: 3' - Dalsgaard inside the box, well marked by the Peruvian defense, disallowing him to take a shot on the goal.

21:32 IST: 2' - Peru asking for an early penalty, after a clumsy challenge inside the box. Referee denies it.

21:30 IST: KICK-OFF! Christian Eriksen gets the ball rolling from left to right for Denmark which is quickly played long in the Peru half, cleared away by the Peruvian defense.

21:06 IST: Denmark are going to play a 3-3-4 formation with Kasper Schmeichel backing the Danish at the nets.

Who's backing #DEN to beat #PER this evening?

Next up, we welcome #PER back to the #WorldCup pic.twitter.com/PAFlbO8EGi

Peru fans have arrived at the #WorldCup #per pic.twitter.com/u7apVM5pQl

19:45 IST: Hello and welcome to the live commentary from the Group C fixture between Peru and Denmark at the Mordovia Arena Saransk in Russia.

Denmark 2018 FIFA World Cup Peru vs Denmark, Match 7 Football Live Score Live Blogs Football
Get the latest updates on ICC T20 Worldcup 2022 and CWG 2022 check out the Schedule, Live Score and Medals Tally. Like us on Facebook or follow us on Twitter for more sports updates. You can also download the NDTV Cricket app for Android or iOS.