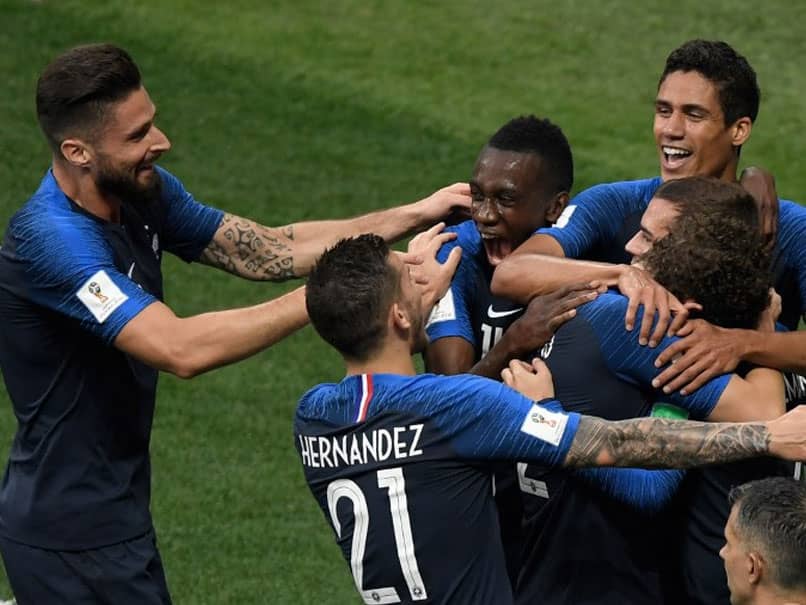 France lifted their second title since 1998 after beating Croatia 4-2 in the FIFA World Cup 2018 final at the Luzhniki Stadium on Sunday. Goals from Kylian Mbappe, Antoine Griezmann, Paul Pogba and an own-goal by Mario Mandzukic gave France the win in an entertaining clash. Croatia scored twice but that didn't help their cause as their dream of lifting their maiden World Cup trophy didn't materialise. The first half saw France lead through Mandzukic's own-goal and Ivan Perisic levelled for Croatia. Griezmann scored from the spot to restore France's lead at half-time. The second half saw plenty of goals but France held their nerves to see them lift the World Cup. (Highlights: France vs Croatia)

22:28 IST: Thank you for staying with us for the live match updates of the FIFA 2018 World Cup final.

22:20 IST: Tolisso ailing as he falls to the ground dramatically. The French fans have started to party it seems as the camera man shows us. Pogba again is on his won but he shows no signs of urgency.

22:14 IST: We are now five minutes away from seeing France lift the World Cup.

22:06 IST: Rakitic's shot goes just wide. Croatia are pushing hard. They have 13 minutes to do so.

22:01 IST: Blaise Matuidi makes way for Tolliso for France in the 72nd minute.

22:00 IST: Rebic comes off as Kramaric comes in for Croatia.

21:59 IST: GOAL! Croatia pull one back after a horrendous mistake by French keeper Hugo Lloris. Mario Mandzukic scores after the blunder in the 69th minute.

21:54 IST: GOAL! Kylian Mbappe hits a powerful shot in the 65th which beats the Croatian keeper. Becomes the second teenager to score a goal in a World Cup. France 4-1 Croatia

Majestic Mbappe , the 2nd teenager after the great Pele to score in a #WorldCupFinal pic.twitter.com/BlrcDBH4ej

21:53 IST: Croatia now have a mountain to climb. They need to score at least 2 goals to take this match into extra-time and need 3 to turn this match around.

21:48 IST: GOAL! Paul Pogba scores with a powerful shot in the 59th minute to which the Croatian keeper has no response. France 3-1 Croatia

21:46 IST: Perisic crosses it but too heavy for Mandzukic. France 2-1 Croatia after 59 minutes

21:42 IST: SUBSTITUTION for France! N'Golo Kante is replaced by Steven Nzonzi in the 54th minute.

21:42 IST: PLAY HALTED! The match is halted after fans intrude the play after running towards the pitch.

21:41 IST: Superb ball by Paul Pogba for Mbappe. Good save by Subasic.

21:37 IST: Ante Rebic's shot gets saved by Hugo Lloris in the 47th minute. Super save by the French keeper.

21:35 IST: Antoine Griezmann tries his luck from distance but Subasic collects it easily. 46 minutes up.

21:16 IST: First half up and what a fantastic half we've had. Super stuff for the neutrals.

21:13 IST: Lovren hits a powerful shot but blocked by Pavard in the French box. Back-to-back corners for Croatia.

21:05 IST: PENALTY! France get the penalty as a result of VAR in the 36th minute. All eyes on Subasic as Croatia look upto him.

21:04 IST: VAR Referral taken! The French are screaming for a handball. The referee seems to be taking advice from the fourth officials. Replays show Ivan Perisic's hand touched the ball.

21:03 IST: CORNER for France after Vida's misheaded clearance in the 33rd minute.

20:58 IST: GOAL! Croatia's Ivan Perisic equalises with a screaming finish for Croatia in the 28th minute. What a way to get back into the game.

20:51 IST: FREE KICK! Modric's turn now to get back into this game. He steps up to take the shot.

20:50 IST: GOAL! France are in front. Own-goal by Mario Mandzukic. Antoine Griezmann curls it in and France are on front in the 18th minute after the last touch off Mandzukic. This is also the first-ever own goal to be scored in a World Cup final. France 1-0 Croatia

20:47 IST: First real chance for France as Mbappe tries to cross the ball from the right wing but no real threat.

20:45 IST: Croatia are catching France on the break. No Croatian player on the six-yard box for the Perisic cross. France 0-0 Croatia after 15 minutes

20:42 IST: WHAT A BALL that was by Rakitic to Perisic. Superb take by Perisic but Lloris was there to take it in the 11th minute.

20:42 IST: This match reminds us of the semi-final between France and Belgium. France seem to be clearing all the danger thrown at them by Croatia just like they did against Belgium.

20:39 IST: CORNER for Croatia! Important tackle by Mbappe on Ivan Strinic. Modric with the corner and Giroud clears it easily.

20:37 IST: Seven minutes up and Croatia have the lion's share of possession.

20:34 IST: Perisic wins the ball well and Umtiti clears the danger. Throw-in for Croatia. Easily dealt with by the French defenders.

20:25 IST: The teams are out in the middle amid loud cheers from the crowd. Their respective National Anthems are being played. First up was France and Croatia's followed soon after.

20:22 IST: The two teams are out in the tunnel as they await their biggest match of their lives while the World Cup trophy is brought onto the pitch by the 2014 champions Germany skipper Philip Lahm.

20:12 IST: Nicky Jam, Will Smith and Era Istrefi are performing on the official song of 2018 FIFA World Cup Russia 'Live It Up'.

20:02 IST: The closing ceremony is underway with a host of performers on the pitch.

19:47 IST: The fans are all eagerly waiting for this epic clash.

19:06 IST: Both sides are unchanged from their semi-final victories over Belgium and England respectively. Didier Deschamps and Zlatko Dalic have reposed faith with the same playing XIs that brought them to the Final.

18:58 IST: The team list is out for both France and Croatia.

18:47 IST: Before we get into the match groove, you may read how Croatia and France got to the World Cup finals.

18:30 IST: FACT! Ivan Perisic has been involved in 10 goals at major tournaments for Croatia (6 goals, 4 assists), the joint-most along with Davor Suker (9 goals, 1 assist).

18:18 IST: FACT! Antoine Griezmann has been involved in 5 goals at the 2018 World Cup (3 goals, 2 assists), no French player has done better in a single tournament over the last 50 years.

18:00 IST: The trophy that everyone has been waiting for has arrived.

The Trophy has arrived at Moscow's Luzhniki Stadium... #WorldCupFinal pic.twitter.com/2ubabJaBFy

17:55 IST: TRIVIA! With an average age of 26 years and 10 days at the start of the World Cup, France could become the youngest squad since Brazil's beloved champions of 1970 (25 years and 5 days at start) to lift the Trophy.

17:52 IST: Welcome to the live match updates of the 2018 FIFA World Cup final between France and Croatia.

Les Bleus laboured through their group, beating Australia and Peru by the odd goal and drawing with Denmark in the only goalless game of the tournament. Beaten on penalties by Italy in the 2006 final, France's hunger is all the greater after the agony of their defeat as hosts against Portugal in the Euro 2016 final. It has been a gruelling, exhausting run for Zlatko Dalic's team, and they must rouse themselves for one last effort. "We took the difficult path, probably we will be the only team at a World Cup to have played eight games to get to a final if you tally up all the minutes," admitted Dalic.