Spain, the 2010 champions, have slipped under the radar after a tumultuous start to the tournament. 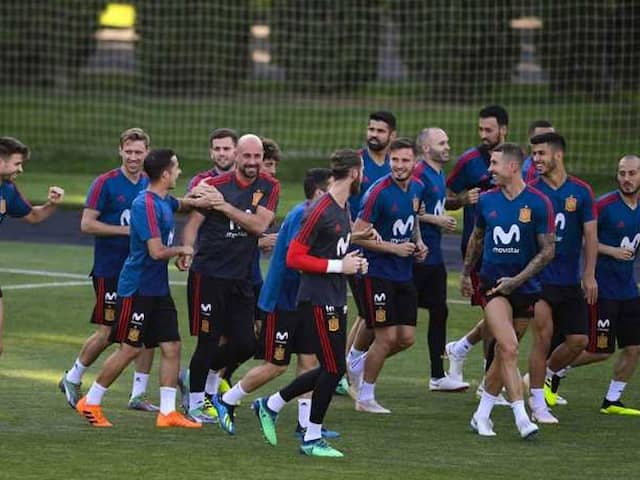 Spain vs Russia Round of 16: Spanish players train ahead of their last 16 clash against Russia.© AFP

Spain have not lost a match since Euro 2016, although they have looked far from convincing after the chaos that saw coach Julen Lopetegui sacked before their FIFA World Cup 2016 first game. They needed a last-gasp equaliser from Iago Aspas in a 2-2 draw with Morocco to pip Portugal to top spot in Group B, and are battling to fix a leaky defence. Hosts Russia, on the other hand, started the tournament with a bang, thrashing Saudi Arabia 5-0 and then outclassing Mohammed Salah's Egypt 3-1. However, the hosts were given a reality check by Uruguay in their final Group A match and will need to return to their best if they are to have any chance against the Spanish.

They are making their first appearance in the FIFA World Cup knockout stages in the post-Soviet era as the ultimate underdogs -- Spain have not lost a match in two years while Russia entered the tournament without winning a game in eight months.

The last competitive match between them saw the Spaniards prevail 3-0 in the semi-finals of Euro 2008.

"We have to get better, we haven't produced our best football," said Bayern Munich midfielder Thiago Alcantara.

"The most important thing for us is to set up well for the Russia game. We're not playing 11 Russians, we're up against thousands of Russians in a full stadium."

Despite a centre-back pairing of Sergio Ramos and Gerard Pique, Spain have conceded five goals in three games with goalkeeper David de Gea looking a shadow of his usual self.

No team in recent memory that has gone on to lift the trophy has conceded more than four goals, a statistic not lost on right-back Dani Carvajal.

"We've got to cut down on the defensive mistakes," said Carvajal. "We've made it far too easy for opponents to score against us, which they've done more because of our errors than their brilliance."

Fernando Hierro, the former Spain defender who took over from Lopetegui, hammered home that same point after the Morocco game.

He must hope the message belatedly gets through in time for their encounter with the tournament's joint-second highest scorers.

Hosts Russia must rebound quickly for Sunday's World Cup last 16 clash with Spain, the 2010 champions who have slipped under the radar after a tumultuous start to the tournament.

Resounding wins over Saudi Arabia and Egypt elevated expectations for Stanislav Cherchesov's side before they were dealt a dose of reality in a 0-3 loss to Uruguay.

Dismissed as no-hopers little over a fortnight ago, Russia will try to get back onboard a wave of national euphoria and pull off what striker Artem Dzyuba called a "minor miracle".

While Russia arrived at the finals winless in eight months before finding some badly-needed form, one of their better results in that period came in a 3-3 draw with Spain last November.

For Sergei Ignashevich, one of three holdovers from the Russia side that lost to Spain in the semi-finals of Euro 2008, there are no secrets about their upcoming opponents.

"Spain plays the same style as in previous years," said the 38-year-old defender.

"Spanish defenders play very high leaving spaces that a counter-attacking team can use. This is probably their only weak spot if they have any."

Russia will return to the Luzhniki Stadium, having played their opening match at the iconic venue, and will lean on fervent support to go in search of a famous win.

"The fact that the game will be at Luzhniki Stadium with almost 80,000 people supporting us is probably the only good consequence from the fact we finished second in our group," said Ignashevich.

Midfielder Alan Dzagoev has rejoined the squad after recovering from a hamstring injury, but Igor Smolnikov is suspended following his red card against Uruguay.

Russia 2018 FIFA World Cup Spain vs Russia, Round of 16 Football
Get the latest Cricket news, check out the India cricket schedule, Cricket live score . Like us on Facebook or follow us on Twitter for more sports updates. You can also download the NDTV Cricket app for Android or iOS.