Germany have won just one of their last six friendlies, but despite the lousy dress rehearsals, the focus is on their opening game in Moscow on Sunday against Mexico. 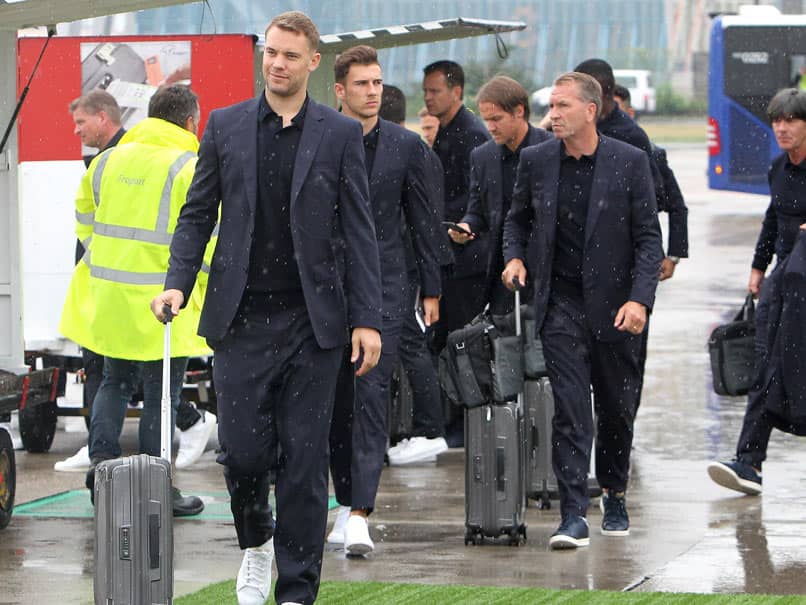 Germany landed in Moscow on Tuesday to attempt to successfully defend their World Cup title and hoping to leave the political controversy surrounding Mesut Ozil and Ilkay Gundogan behind them. The intent is clear -- Germany want to become the first team for 56 years to retain the World Cup. "We want to write history," says Real Madrid midfielder Toni Kroos. The Germans took off from Frankfurt in pouring rain hoping captain Manuel Neuer will stay fit after eight months on the sidelines with a foot fracture. Their buildup was dogged by the controversy surrounding Ozil and Gundogan after the midfielders, who have Turkish roots, were booed in pre-World Cup friendlies for meeting Turkish President Recep Tayyip Erdogan.

The Premier League stars met Erdogan in London last month with Gundogan handing him a signed Manchester City shirt with the message "to my president".

German fans took a dim view of the perceived divided loyalty by booing the pair in a friendly defeat to Austria.

Gundogan has said the meeting was not politically motivated, while Ozil has refused to talk about it during the World Cup.

"This is his statement, I assume he will stick to it," said team director Oliver Bierhoff during the training camp in Germany.

"Whether that is right or wrong is another matter," added Bierhoff, who said the players did not act "maliciously", but had been "naive".

Off-field distractions aside, the Germans arrived well-prepared and are bringing 26 sets of jerseys among their 12 tonnes of equipment.

During the flight, their stars visited the cockpit - Mats Hummels watched over the pilot's shoulder while Jerome Boateng and Marco Reus posed for selfies.

However, the Germans know they are the team to beat in Russia and head coach Joachim Loew said their rivals had all made advances.

"There will be a high standard of opposition. Spain have improved, while Brazil and Argentina are up there."

Germany have won just one of their last six friendlies, but despite the lousy dress rehearsals, the focus is on their opening game in Moscow on Sunday against Mexico.

"The first group game is always a sticking point, because it tingles," said veteran forward Thomas Mueller, who will lead Germany's attack.

Their nervy 2-1 win over Saudi Arabia last Friday is now in the past.

"There is no reason to blubber now, we are world champions," added Mueller.

"We have many players who are in a fit state."

The Germans hope that particularly applies to Neuer, the world-class Bayern Munich goalkeeper who has played just two matches since fracturing his foot last September.

Germany Football
Get the latest updates on India vs Australia Series, check out the India vs Australia Schedule for 2020-21 and Ind vs Aus live score . Like us on Facebook or follow us on Twitter for more sports updates. You can also download the NDTV Cricket app for Android or iOS.