Timo Werner was in the thick of the action for the 62 minutes he played during the Germany vs Saudi Arabia FIFA World Cup friendly. 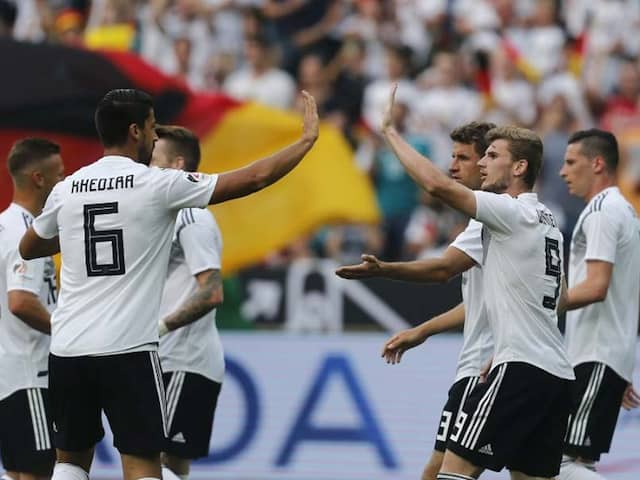 Timo Werner impressed as Germany gave themselves a pre-World Cup boost on Friday by breaking their five-match winless streak with a nervy 2-1 victory over Saudi Arabia in their final FIFA World Cup warm-up game. First-half strikes from striker Werner and an Omar Hawsawi own goal sealed the win as Germany were only rarely threatened by Saudi Arabia, who play hosts Russia in the opening 2018 World Cup match in Moscow on Thursday. Werner was in the thick of the action for the 62 minutes he played of the friendly.

The scoreline flattered the Arabians, who converted a late penalty at the second attempt.

However, German hearts were in mouths in added time when only robust defending prevented Al-Sahlawi grabbing a shock equaliser.

"There are no little teams anymore and we didn't do well in a few areas," admitted Germany winger Marco Reus, who hit the post early on.

"We conceded a few counters, the holes were too big, but we are a tournament team and we still have a week left - Germany shouldn't worry."

Having failed to win any of their previous five games, including a shock 2-1 defeat at neighbours Austria last Saturday, a full-strength German team dominated for long spells in Leverkusen.

Both Sami Khedira and Reus hit the post in the first half as Germany could easily have doubled their tally, but there were also worrying defensive lapses from the hosts.

Saudi Arabia were crushed 8-0 by Germany in a group phase game at the 2002 finals and it looked like a similar rout was on the cards early on.

Germany grabbed the lead after just eight minutes when a Joshua Kimmich long ball was beautifully controlled by Reus, who squared for Werner to fire home.

It took 30 minutes for the visitors to trouble the German defence when forward Fahad Al-Muwallad twice shot wide.

Khedira forced Saudi goalkeeper Abdullah Al-Mayouf into a reflex save on 37 minutes, palming his shot onto the post.

The second goal came just before the half-time whistle when Werner's cross for Thomas Mueller was tapped into his own net by Hawsawi.

Germany head coach Joachim Loew made two changes for the second half with Ter Stegen replacing captain Manuel Neuer in goal and Niklas Suele coming on for defender Jerome Boateng.

Ilkay Gundogan replaced Reus for the final 30 minutes and was booed by Germany fans, despite going close on 61 minutes.

The Manchester City midfielder caused a political storm last month along with Mesut Ozil by meeting Turkey president Recep Tayyip Erdogan and handing over a signed shirt to "my president".

With 15 minutes left, Leverkusen winger Julian Brandt nearly made it 3-0 when he fired wide before the visitors gave the Germans a nervous final 10 minutes.

Germany face Mexico in their opening World Cup match in Moscow on June 17, also facing Sweden in Sochi and South Korea in Kazan in Group F.

Saudi Arabia 2018 FIFA World Cup Football
Get the latest Cricket news, check out the India cricket schedule, Cricket live score . Like us on Facebook or follow us on Twitter for more sports updates. You can also download the NDTV Cricket app for Android or iOS.