Germany are now winless in their last five games since suffering back-to-back defeats after losing 0-1 to Brazil in Berlin last March. 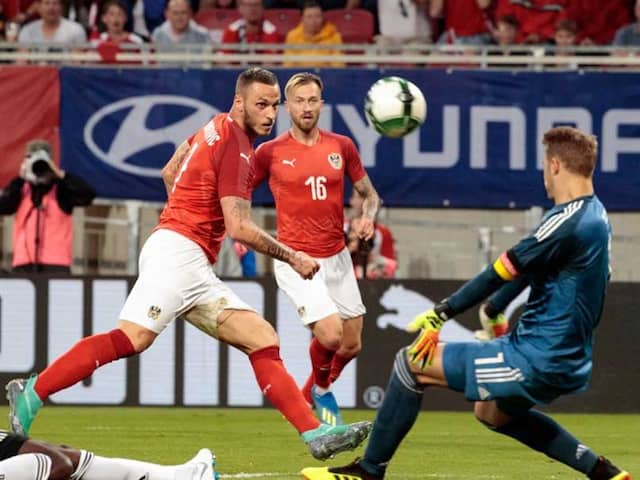 Manuel Neuer looks set to go to the FIFA World Cup, but Germany's goalkeeper was unable to prevent his team crashing 1-2 to Austria on his comeback on Saturday. Neuer has proven his fitness after eight months sidelined by a fractured foot in timely fashion, with four names to be cut ahead of Germany naming their final 23-man 2018 World Cup squad on Monday. But the 'keeper was powerless to stop second-half goals by Martin Hinteregger and Alessandro Schoepf after Mesut Ozil gave the Germans an early lead.

The result is a big concern for Germany head coach Joachim Loew with the World Cup to kick off in less than a fortnight.

The world champions are now winless in their last five games since suffering back-to-back defeats after losing 0-1 to Brazil in Berlin last March.

"It was a good comeback from Manuel after so long out," Loew told broadcaster ZDF.

"The defeat is annoying, we did well in the first half, but we lost a lot of ball in the second half and made life hard for ourselves.

"A lot of things were bad today."

This was Austria's first win over their neighbours in nearly 32 years - dating back to October 1986 when Rudi Voeller scored West Germany's only goal in a 4-1 defeat in Vienna.

After 259 days out injured, Neuer pulled off a string of saves in an impressive first-half display, but had little chance to stop Austria's goals after Germany's defence leaked badly in the second half.

The friendly came close to being called off after heavy rain in Klagenfurt delayed kick-off by an hour and forty minutes.

When it eventually got under way, Germany took the lead on 11 minutes after pressing the Austrian defence.

Ozil snapped up a poorly timed clearance kick from Joerg Siebenhandl and curled his shot back around the Austria goalkeeper to claim his 23rd goal in his 90th international.

At the other end, Neuer made his first save on 16 minutes to deny attacking midfielder Schoepf.

Julian Brandt came within a whisker of putting Germany two goals up when he fired wide four minutes later.

Neuer then made a key save by pushing Florian Grillitsch's shot around the post on 32 minutes as it was 1-0 to Germany at the break.

Loew made a change at the break when Bayern midfielder Sebastian Rudy, a prime candidate to be one of the four cut from the World Cup squad, replaced Sami Khedira at half-time.

Rudy was not to blame, but Germany lost their shape as the hosts came flying out of the blocks for the second half and kept the world champions' defence under pressure.

Austria levelled when Hinteregger unleashed an unstoppable volley, direct from a corner, past Neuer unmarked at the back post on 53 minutes.

Loew tried to shake things up with a double substitution on 67 minutes, throwing on forwards Timo Werner and Marco Reus, but Austria took the lead moments later.

Stefan Lainer tapped back into the area and the German defence failed to shut down Schoepf, who fired past Neuer to the delight of the home crowd.

Austria have failed to qualify for the World Cup, while Germany face Saudi Arabia on Friday in their final warm-up before playing Mexico on June 17 at Russia 2018.

Austria Manuel Neuer 2018 FIFA World Cup Football
Get the latest Cricket news, check out the India cricket schedule, Cricket live score . Like us on Facebook or follow us on Twitter for more sports updates. You can also download the NDTV Cricket app for Android or iOS.