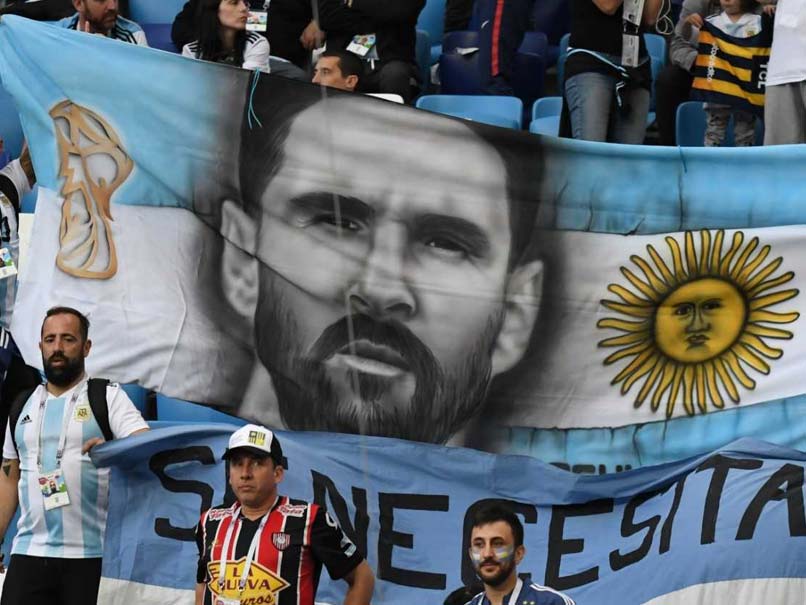 Ahead of the Argentine superstar Lionel Messi's 31st birthday on June 24, his die-hard fan, Kolkata-based Shib Shankar Patra who painted his house in white and blue in anticipation of the FIFA World Cup 2018, has denied any compromise on the annual celebration. However, Argentina's shock 0-3 capitulation to Croatia in the group stages of the World Cup left him shattered. Needing a victory after playing out a 1-1 draw against minnows Iceland, the South American heavyweights produced a poor show to leave their hopes of reaching the knockouts hanging by a thread.

Argentina will now have to depend on the results of other teams in Group D besides having to beat Nigeria in their last preliminary round engagement.

"I did not watch the game against Croatia. I told my daughter to watch as I felt if I don't watch, maybe they will win. Superstitions you see," Patra told IANS.

Owner of a tea and snack stall in North 24 Parganas' Nawabganj township, the 53-year-old had saved up Rs 60,000 to travel to Russia this time but when a city-based travel agent informed him that his savings were not enough, he decided to utilise the money to paint his entire three-storied building in Argentina colours.

Every four years, coinciding with the World Cup, Patra who runs his tea stall from the ground floor, gives his building a fresh coat of light blue and white shade.

"It will be no different this time," gushed Neha.

Since 2012, the Patra family observes Messi's birthday by cutting a cake, distributing clothes and sweets among children in the neighbourhood, and this year has plans to give 100 Argentina jerseys to the kids.

India's U-17 World Cup striker Rahim Ali will be present on the occasion along with local MLAs. With Messi turning 31, a 31-pound cake will be cut this time.

"Winning and losing is part of life. Yes we had high hopes. But the way coach (Jorge Sampaoli) used his players on Thursday, I did not like. Messi hardly saw the ball and there was no plan.

"We cannot stop rooting for Argentina and Messi. It's in our blood. The birthday celebrations will go on as planned and although it would have tasted sweeter had we won, there is always a next time," added Neha, also an avid Argentina supporter.

She further informed that her father had refused to have lunch on Friday afternoon and it was only after much coaxing that he relented.

"I am very sad, I can't tell you how much. Argentina is my life and that's why my house is draped in their colours," Patra said.

"I expect a lot from Argentina and of course Messi. If given a chance, I would still go to watch them play against Nigeria on June 26," he added.

Lionel Messi Football 2018 FIFA World Cup
Get the latest updates on ICC Women's Cricket World Cup 2022 and IPL 2022, check out the Schedule , Live Score and IPL Points Table. Like us on Facebook or follow us on Twitter for more sports updates. You can also download the NDTV Cricket app for Android or iOS.