FIFA World Cup 2018, Highlights, Serbia vs Brazil: Paulinho and Thiago Silva scored for Brazil in their 2-0 victory over Serbia 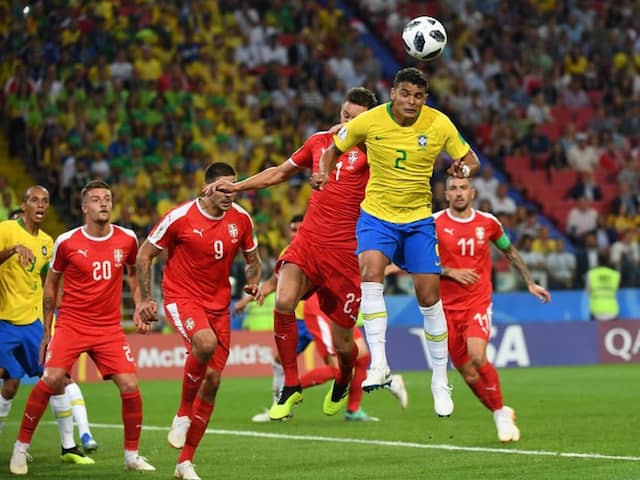 Brazil eased into the World Cup knockout stages after defeating Serbia 2-0 here Wednesday, with superstar Neymar sparkling in a win which sets up a last 16 clash against Mexico. Paulinho put Brazil ahead with a superb dinked finish on 36 minutes before Neymar swung in a cross for Thiago Silva to header the Selecao's second goal with 22 minutes left in Moscow. Having opened his Russia 2018 account with the second of Brazil's two late goals in Friday's 2-0 win over Costa Rica, Neymar was again impressive. After the tearful emotion of Saint Petersburg, Neymar cut a more joyful figure after this win, blowing kisses to the crowd as the five-time champions celebrated.  (Highlights: Serbia vs Brazil)

01:14 IST: A clipped pass from Fernandinho ricochets off Zivkovic and Neymar, looking to put it past the keeper, is denied by a brilliant save.

01:11 IST: Less than eight minutes top go and Brazil are not letting go of their possession. Serbia, on the other hand, it seems, have given up.

00:57 IST: GOOAALL!! Thiago Silva doubles Brazil's lead in the 68th minute. Brazil get a free-kick, Neymar curls the ball in, Silva, who was unmarked, jumps and his header see the ball in the back of the net. Serbia 0-2 Brazil

00:53 IST: 64th minute -- Mitrovic is in the action again. Rukavina provides a looping long-ball, Mitrovic jumps and his header is collected by Allison on the goalline. Brazil is clearly on the backfoot.

00:51 IST: 61st minute -- Serbia miss out on an equaliser. Rukavina crosses the ball low in the box, Allison makes a mess of it while clearing the ball away as he only managed to send the ball as far as Mitrovic, who was lurking around. Mitrovic's header is denied by a Brazilian defender who was present behind the goalie. This was so, so close.

00:47 IST: 58th minute -- Serbia are creating far more better and clearer chances in the second-half. The Brazilian defence will have to be on their toes.

00:46 IST: After an goal attempt from Serbia goes astray, Brazil provides with a brilliant break. Willian smartly heads the ball to Coutinho, who plays a beautiful pass to Neymar, running down the line. But Neymar is unable to finish it as the keeper denies him of any space to shoot.

00:45 IST: In the other game, Costa Rica have equalised against Switzerland.

00:40 IST: Willian makes a run down the left flank and provides a low cross but Milenkovic, present near the keeper, clears the ball away.

00:39 IST: Five minutes of the second half have been played and neither of the teams are going forward with the attack.

00:34 IST: The second half of the Serbia vs Brazil match starts. Brazil have a slender lead.

#BRA lead at the interval at Spartak Stadium. #SRBBRA pic.twitter.com/18aJlrDrNs

00:06 IST: GOAL!!! Paulinho has put Brazil in the lead in the 36th minute. Coutinho spots a brilliant run by Paulinho and chips a pass to him. The keeper charges out but Paulinho beats him to the ball and as the ball finds the back of the net.

11:54 IST: Gabriel Jesus makes a run down the left flank, beats the Serbian defender, Neymar was lurking around. He takes the shot but the Serbian keeper palms the ball away.

11:40 IST: Brazil get a free-kick. Willian takes the short corner, Neymar passes the ball to Coutinho, who puts the ball in the Serbian box but the ball is cleared away.

11:46 IST: Mitrovic was looking dangerous inside the Brazilian box, but the ball was cleared away. Neymar, on the counter makes the run, passes the ball to Coutinho, who finds Willian at the right flank. And Willian's cross goes miles above the Serbian post.

11:44 IST: 14th minute -- Serbia get a free-kick. Aleksandar Kolarov curls the ball in but the ball is headed away out of harm's way.

11:40 IST: 10 minutes are up -- Brazil are looking confident, while Serbia on the other hand are giving away their possession.

11:34 IST: Gabriel Jesus makes a run down the left flank, beating all the defender, takes a shot but is blocked by the Serbian keeper. However, it wouldn't have mattered as the offside flag was up.

11:32 IST: Neymar makes a run with the ball down the middle, provides a beautiful pass to Coutinho, who takes the shot but is blocked the Jesus.

11:25 IST: Both teams are on the field as the respective national anthems are being sung.

11:15 IST: Here is the starting XI for Serbia and Brazil.

11:00 IST: Hello and welcome to the live blog of the Serbia vs Brazil match.

The 26-year-old Paris Saint-Germain forward had surgery on a foot fracture at the start of March and did not play again until Brazil's 2-0 friendly win over Croatia three weeks ago, when he came off the bench to score. Fagner will hope to keep his place when Brazil take on Serbia, needing just a point to secure a place in the last 16 from Group E and a win to be sure of finishing top. However, Douglas Costa will miss the game, having suffered a thigh injury after coming off the bench against Costa Rica.

Brazil 2018 FIFA World Cup Football Serbia vs Brazil, Match 43 Switzerland vs Costa Rica, Match 44 Live Blogs
Get the latest Cricket news, check out the India cricket schedule, Cricket live score . Like us on Facebook or follow us on Twitter for more sports updates. You can also download the NDTV Cricket app for Android or iOS.