FIFA World Cup 2018, Highlights, Iran vs Portugal: Iran held Portugal to a 1-1 draw at the Mordovia Arena. However, Portugal made it to the last 16. 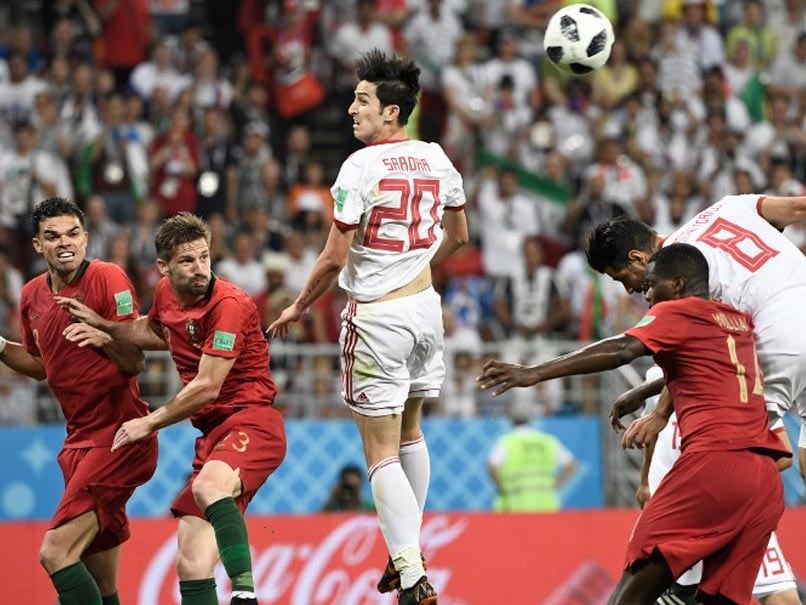 Spain and Portugal reached the World Cup last 16 on Monday after two dramatic final group games dominated by VAR decisions. Spain drew 2-2 with Morocco to top Group B thanks to a late Iago Aspas equaliser that was referred to the video assistant referee and Iran held Cristiano Ronaldo's Portugal to a 1-1 draw. Fernando Hierro's Spain, the 2010 world champions, will play Russia in the next round in Moscow on Sunday while European champions Portugal face Uruguay in Sochi the previous day.(Highlights: Iran vs Portugal) (Highlights: Spain vs Morocco)

01:30 IST: And it is all over! Spain and Portugal qualify for the Round of 16 after finishing first and second respectively in Group B standings. | FT -- Iran 1-1 Portugal and Spain 2-2 Morocco

01:20 IST: Six minutes of added time! And Iran get a penalty over a Portugal hand ball. GOAL !! Karim Ansarifard scores from the spot to give Iran an important equaliser in the 90 + 3 min.

01:17 IST:Last few minutes to go. Are there any late dramas left?

01:11 IST: GOAL!! 81st minute -- What a goal! Amrabat takes a corner, where En-Nesyri leaps and towers over Ramos to find the back of the game. De Gea couldn't move a muscle. Spain 2-1 Morocco.

01:10 IST: 10 more minutes to go. Can Portugal seal the deal with another goal or will Iran equalise?In the other match, Morocco are piercing the Spanish defence repeatedly and looking for a winner.

01:00 IST: 70 minutes are up -- Portugal are still leading possession and have the game under control. However, an Iranian danger in form of a goal is lurking around. Portuguese defenders have to be on their toes.

00:51 IST: 61st minute -- In the Spain vs Morocco match,Isco receives a beautiful cross in the box, he leaps and heads the ball past the keeper at the far post but Saiss denies him a goal by heading the ball away. That was an absolute magnificent goalline clearance.

00:45 IST: 55th minute -- Amrabat receives possession 30 yards away from the goal, shoots and De Gea doesn't get any second to move as the ball hit the crossbar. This could've given Morocco a 2-1 lead against Spain.

00:42 IST 53rd minute --Ronaldo takes the penalty, Beiranvand dives to his left and BLOCKS the ball from finding the back of the net. Ronaldo is denied as Portugal fail to capitalise on their breathing space.

What a start to the second half! #POR are awarded a penalty following a VAR referral, but @Cristiano's effort is SAVED by Beiranvand! #IRNPOR 0-1#ESPMAR 1-1 pic.twitter.com/5HYuNrUSjk

00:40 IST: Haji Safi brings Ronaldo down in the box and Portugal opt for the review. Iran players are not at all happy as the referee gives Portugal a penalty.

00:35 IST: The second-half of Group B matches between between Iran-Portugal and Spain-Morocco starts.

Our half-time graphic was ruined, but #POR fans will not care!

00:15 IST: 45th minute -- GOAL! Ricardo Quaresma gives Portugal a 1-0 lead. Quaresma makes a run down the right flank, gets the pass back just right outside the and a lovely curling shot with the outside of the foot curls and flies past Beiranvand

00:12 IST:42nd minute -- Quaresma gets the ball on the right side of the penalty area, shoots but the ball flies high over the Iranian crossbar. Portugal are not resting as they are desperately looking for a lead before the half-time.

00:10 IST: 40th minute --Ronaldo gets yet another shot at the goal but hist it straight to the Iranian keeper.

00:07 IST:37th minute -- In the Spain vs Morocco match, Busquets misses a great chance as he heads Isco's corner over the bar.

00:03 IST: Iran get a free-kick just a few yards outside the box. Majid Hosseini curls the ball in, unmarked Saeid Ezatolahi heads the ball straight to the keeper. Close, close chance for Iran.

00:00 IST 30 minutes are up -- Portugal are still dominating the game. Iran are reminding Portugal about their danger with sudden attacks.

23:54 IST:Iran, on the counter attack, slide the ball in the box, where Rui Patricio reaches it just before Jahanbakhsh. Had the Portuguese not reached the bal lon time, Portugal might've been trailing by a goal.

23:44 IST: GOALL!! In the other match, Morocco's Khalid Boutaib has put his team in front. Andres Iniesta loses possession on the halfway line and Khalid Boutaib races clean through, keeps his cool and slots a low shot beyond David de Gea. | Spain 0-1 Morocco.

23:42 IST:The Iranian keeper is having a tough time at the post as he dropped two successive ball off the Portugal cross and that too in dangerous positions. The Iranian defence have been good to clear to ball away without much hassle.

23:10 IST: Ten minutes are up-- Portugal have the possession but Iran are bursting into sudden attacks.

23:37 IST:Vahid Amiri makes a mess of an opportunity as he sends the ball miles off the target. The Portuguese keeper is at ease.

23:34 IST: In the Spain vs Morocco match, Spain, too, gets an early opportunity but the Morocco keeper holds on to the ball.

23:33 IST: 3rd minute --Ronaldo gets an early opportunity to put his team in the lead but he shoots it straight to the Iranian keeper.

23:30 IST:KICK-OFF! The Group B matches between between Iran-Portugal and Spain-Morocco begins

23:25 IST:Iran and Portugal walk out to the middle and the respective national anthems are being sung. Meanwhile, the same pre-match ritual are being carried at the Kaliningrad Stadium, where Spain is up against Morocco.

22:55 IST: Trivia --Iran's Carlos Queiroz will be the 20th coach in World Cup history to face off against his homeland. The first was Josef Nagy, who led Sweden against Hungary in 1938. In 2002, Frenchman Bruno Metsu led Senegal to victory over Les Bleus, who were reigning champions at the time.

22:45 IST:The starting XI of Spain and Morocco have been announced.

Here are the teams for #ESP and #MAR #ESPMAR pic.twitter.com/mu9T1Pi8Os

22:30 IST:The starting XI of Iran and Portugal have been announced.

21:35 IST:Meanwhile in the other Group A matches -- Uruguay topped the Group with a 3-0 win over Russia; Saudi Arabia beat Egypt 2-1.

3 wins out of 3. #URU finish Top of Group A.
Sumptuous @LuisSuarez9 free-kick, one to re-watch later. pic.twitter.com/mE7us7zBlq

21:30 IST: Hello and welcome to the live blog of the matches between Iran-Portugal and Spain-Morocco.

Ronaldo is level with Belgium striker Romelu Lukaku in the race for the golden boot, leaving eternal rival Lionel Messi in the dust as Argentina scrap to stay in the competition. Portugal coach Fernando Santos compared his talisman to a bottle of "Port wine", marvelling at the 33-year-old's ability to refine his game with age. Atletico Madrid coach Diego Simeone, the former Argentina midfielder, even indicated he would prefer to have Ronaldo rather than Messi in his team.

Portugal 2018 FIFA World Cup Football IR Iran vs Portugal, Match 36 Spain vs Morocco, Match 35 Live Blogs
Get the latest updates on T20 World Cup, check out the T20 World Cup Schedule and Live Score . Like us on Facebook or follow us on Twitter for more sports updates. You can also download the NDTV Cricket app for Android or iOS.