Iceland coach described Saturday's Group D opener against Argentina as the biggest match in the history of the team. 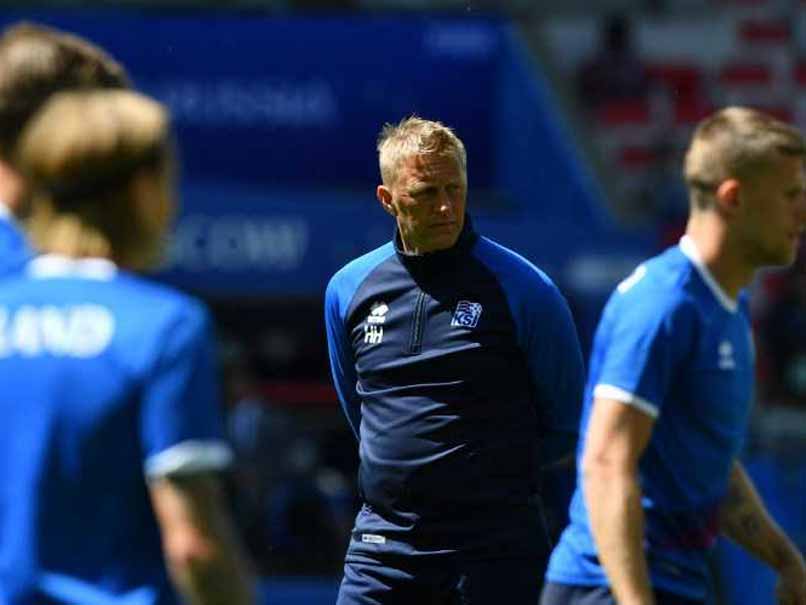 Iceland coach Heimir Hallgrimsson said the minnows are ready to spring another surprise in Russia.© AFP

Lionel Messi's Argentina will underestimate Iceland at their peril, coach Heimir Hallgrimsson warned on Friday, saying the minnows are ready to spring another surprise in Russia. Hallgrimsson described Saturday's Group D opener against the South Americans as the biggest match in the history of the team but said the players were calm and positive. He said the Icelanders, who famously dumped England out of Euro 2016 on their way to the quarter-finals, were primed for their first-ever World Cup match. "We've shown that if we work together as one unit, like we've been doing, then anything is achievable and it won't come as a shock," he said.

"If someone is surprised (by that) then they don't know much about Iceland football."

Iceland, with a population of only 330,000, is the smallest nation ever to reach the FIFA World Cup finals.

But Hallgrimsson bristled when questioned about how it felt to be part of such a fairytale, saying Iceland had earned the right to face two-time world champions Argentina at Moscow's Spartak stadium.

"I don't agree it was a miracle we've come so far," he said. "We're 22nd in the FIFA rankings and won our group in qualifying. We deserve to be here."

Iceland are in one of the tournament's toughest groups, featuring Croatia and Nigeria, as well as Messi's Argentina.

Hallgrimsson said his players' experience of Euro 2016 in France would help settle any nerves.

"When we went to France we didn't really know what we were getting into," he said of the campaign, in which Iceland beat England and Austria in addition to drawing with Cristiano Ronaldo's Portugal.

"We were full of adrenaline in everything we did. Now hopefully we can use that experience at the World Cup."

Iceland captain Aron Gunnarsson said the weight of expectation going into the match was squarely on Argentina, leaving his team comparatively stress-free.

"It's a strong team we're meeting tomorrow but our staff have done their analysis," he said.

"We feel we're ready for this. It'll be a difficult game but we don't have a lot of pressure on us. We have nothing to lose, we feel good."

Quizzed on how Iceland would handle five-time world player of the year Messi, Hallgrimsson cited his team's all-for-one ethos.

"I don't have any magic formula. Everyone's tried everything against him and he always manages to score," he said. "He's one of the best players in the world.

"We'll do it like we do everything, we'll work together as a team. It's unfair to give one player the role of marking Messi."

But he said it would be a mistake to concentrate solely on the Barcelona maestro as Argentina had multiple players capable of taking control of a game.

"Iceland could go out and play the best game of our lives and still lose against a fantastic team like Argentina," he said.

Iceland 2018 FIFA World Cup Argentina vs Iceland, Match 6 Football
Get the latest updates on India vs South Africa and check out  Schedule, Results and Live Score. Like us on Facebook or follow us on Twitter for more sports updates. You can also download the NDTV Cricket app for Android or iOS.