A crowd estimated at more than 100,000 thronged the capital's main square. 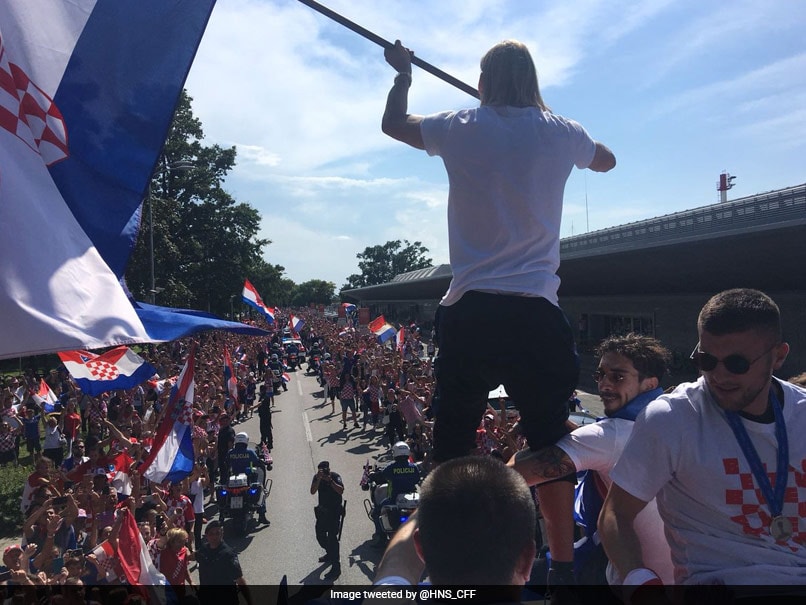 Tens of thousands of Croatians gave a heroes' welcome to their team in Zagreb.© Twitter

Tens of thousands of Croatians gave a heroes' welcome to their team in Zagreb on Monday after the squad returned from Russia following their World Cup final defeat. A crowd estimated at more than 100,000 thronged the capital's main square to see the players, led by captain and World Cup Golden Ball winner Luka Modric, parade through the streets on an open-top bus. Cheering fans, many waving flags and wearing the famous red and white shirt of Croatia, held up banners celebrating the runners-up after their gallant 4-2 defeat by France.

"This is how Croatia is loved," read one banner. Another said: "We are few, but we believed and that is enough".

Many even skipped work to celebrate the team reaching their first ever World Cup final.

"I closed my office to welcome our heroes. I put a sign up reading 'Today, July 16, 2018', office closed due to our Vatreni ('the Fiery Ones' in Croatian)," doctor Sanja Klajic told AFP.

Earlier noisy fans awaited their side's appearance by singing a popular song "Play on my Croatia, when I see you my heart is on fire!" while watching the plane carrying the team progress to the capital on a giant TV screen.

When the plane, accompanied by military jets and emblazoned with the logo "Bravo Vatreni" flew overhead the crowd cheered and chanted "Hands up, hands up!".

After landing at the city's airport around 3:25 pm (1325 GMT), the players emerged to shrieks from fans at the terminal.

France 2018 FIFA World Cup France vs Croatia, Final Football
Get the latest updates on ICC Women's Cricket World Cup 2022 and IPL 2022, check out the Schedule , Live Score and IPL Points Table. Like us on Facebook or follow us on Twitter for more sports updates. You can also download the NDTV Cricket app for Android or iOS.