Eriksen's magnificent hat-trick inspired Denmark to a 5-1 demolition of the Republic of Ireland. 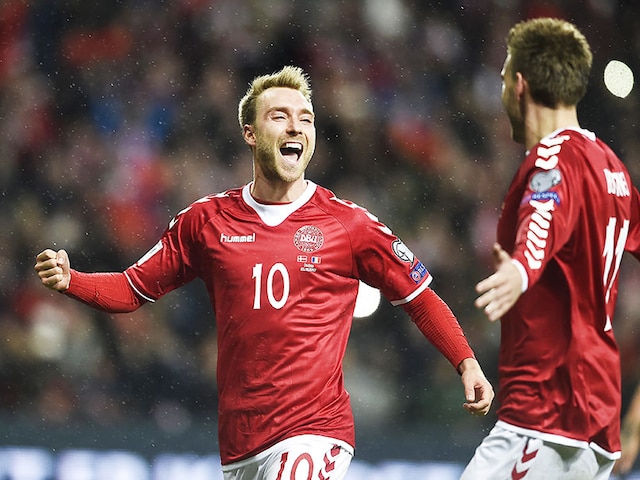 Christian Eriksen's magnificent hat-trick inspired Denmark to a 5-1 demolition of the Republic of Ireland in Tuesday's second leg of their play-off in Dublin to clinch a spot at next year's World Cup. Following Saturday's stalemate in Copenhagen, Ireland got their home leg off to the perfect start when Shane Duffy headed them into the lead after only six minutes, but Denmark struck twice before the break and three more in the second half to seal their place in Russia.

"It is an incredible feeling. We have been fighting for so long to get to the World Cup. We are very much looking forward to it," said Eriksen.

"It is not often I score any hat-trick so of course it is incredible."

The equaliser arrived in fortuitous circumstances on 19 minutes when Cyrus Christie helped bundle in Andreas Christensen's effort, but there was nothing lucky about Eriksen's thunderbolt for the second or his second-half brace.

Nicklas Bendtner, on as a late substitute, completed the rout in the final minute with a penalty after a clumsy trip on him by James McClean, extending Ireland's wait for a first World Cup appearance since 2002.

"The two goals we conceded within a couple of minutes knocked us. We had to chase the game and Denmark took advantage. They deserved to go through."

O'Neill, who had already agreed a new contact to lead Ireland into the qualifiers for the 2020 European Championship, will ship criticism for again selecting his team without the craft of Wes Hoolahan.

The 35-year-old, one of four Ireland players likely to retire from international football, was only introduced at the interval with Ireland needing three goals to redeem their cause.

Duffy will certainly be around for the next campaign and his role as a central figure was solidified by his second crucial goal of the campaign.

After Daryl Murphy earned a free-kick on the halfway line, Robbie Brady's delivery was telegraphed perfectly for the giant centre-back to arrive on cue to nod past the onrushing Kasper Schmeichel.

That early breakthrough ensured the game opened up and Murphy nearly added a second only to ripple the side-netting with a volley.

Denmark began to take encouragement from the space they were finding behind the home side's rigid defence and a piece of magic from Pione Sisto conjured the equaliser.

His raid from the wing left Stephen Ward for dead and the left-wing cross found Christensen, whose close-range effort clipped the inside of the post and deflected in off the luckless Christie.

Three minutes later and the task deepened for Ireland. Ward was again exposed by losing the ball and Nicolai Jorgensen picked up Eriksen and he found the top corner past Darren Randolph with a first-time shot from 25 yards.

O'Neill's decision to ring the changes at the break did little to ease the pressure as Sisto forced a reflex save from Randolph with a shot from distance.

All Ireland could muster was the odd half chance from set-pieces, leaving space for Denmark and Eriksen to capitalise on.

After nearly grabbing his second on 56 minutes, the Tottenham talisman made no mistake on 63 minutes when he completed a flowing move between four players by curling a left-footed shot beyond the outstretched arm of Randolph.

While McClean and substitute Shane Long spurned openings for Ireland to try claim some respectability, they conceded again from another Ward error.

The Burnley man's feeble attempt at clearing a cross enabled Eriksen to dash in and rocket his shot into the top corner for his hat-trick.

To compound Ireland's woe, they conceded a late penalty which Bendtner gave Randolph no chance with by hammering into the top left corner.

Comments
Topics mentioned in this article
Christian Eriksen Denmark Football 2018 FIFA World Cup
Get the latest Cricket news, check out the India cricket schedule, Cricket live score . Like us on Facebook or follow us on Twitter for more sports updates. You can also download the NDTV Cricket app for Android or iOS.