Zimbabwe fast bowler Kyle Jarvis' disciplined spell of six overs for one run at the start of the day set the platform for Keegan Meth and Shingirai Masakadza to rip out five wickets in the morning session, before Jarvis returned after lunch to claim three wickets in seven balls. 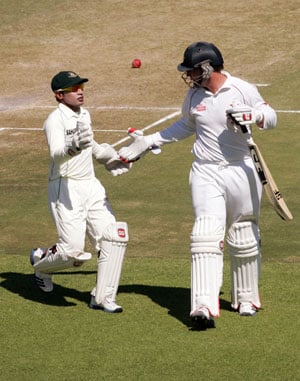 Zimbabwe will go into day four of the first Test against Bangladesh eyeing victory over their closest rivals after gaining the most from a wicket-filled Friday at Harare Sports Club.

The hosts went to stumps on 187 for seven in their second innings, with captain Brendan Taylor again leading from the front with an unbeaten 81, giving them an overall lead of 442.

Bangladesh will already require a world-record score to win the match.

After the first two days of the match had produced a combined total of 484 runs and 11 wickets, at one stage the third had seen 11 wickets fall for the addition of just 48 runs.

That was largely due to an embarrassing collapse by Bangladesh, who began the day on 95 for one but were bowled out for 134 shortly after lunch to give Zimbabwe a first-innings lead of 255.

Each of the Bangladeshi top three made 29 or more, but the next eight batsmen managed just 18 runs between them, with the last four all registering ducks. The last five wickets went down without a run being added.

Zimbabwe fast bowler Kyle Jarvis' disciplined spell of six overs for one run at the start of the day set the platform for Keegan Meth and Shingirai Masakadza to rip out five wickets in the morning session, before Jarvis returned after lunch to claim three wickets in seven balls.

Despite Zimbabwe's significant advantage, Taylor opted not to enforce the follow-on.

"In the back of our minds we still knew there were two and a half days," said Jarvis.

"If they had batted well second time around then we would have ended up bowling around 40 each which we didn't think was in our best interest with just three days between Tests."

The decision appeared to have backfired when Robiul Islam took four wickets for nine runs at the start of the second innings, as Zimbabwe stuttered in spite of their huge lead.

"I thought credit must go to Robiul - he bowled well and deserved all those wickets," said Masakadza.

However Taylor once again steadied the innings, finding support from Elton Chigumbura, who made 27, and Graeme Cremer, who scored 43.

In between those partnerships Robiul picked up two wickets in two balls to claim a six-wicket haul in the innings and increase his match haul to nine.

Bangladesh will require a world record score to win, leaving Taylor with the decision of whether or not he should declare overnight or seek to become just the third Zimbabwean to score two centuries in the same match.

Comments
Topics mentioned in this article
Cricket Zimbabwe vs India 2013 Brendan Taylor Shingirai Masakadza Keegan Meth Virat Kohli Bangladesh Cricket Team West Indies Cricket Team Zimbabwe Cricket Team
Get the latest updates on SA vs IND 2021-22, check out the Schedule and Live Score . Like us on Facebook or follow us on Twitter for more sports updates. You can also download the NDTV Cricket app for Android or iOS.