Ajinkya Rahane was put in charge of a second-string squad for the tour of Zimbabwe for three ODIs and two Twenty20 internationals while resting MS Dhoni and a host of other senior cricketers. 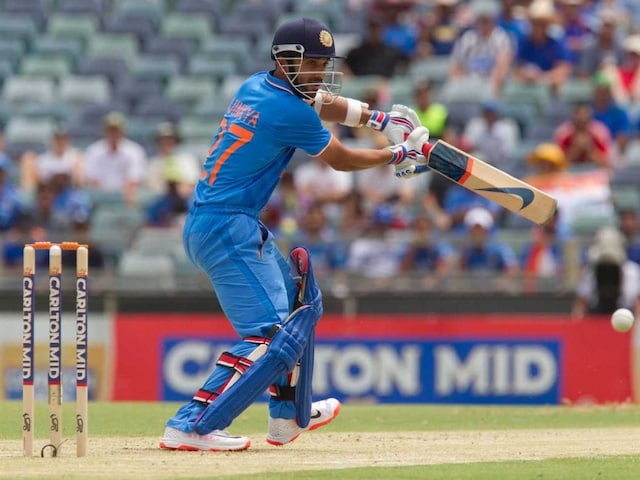 Ajinkya Rahane in action during the World Cup© AFP
Mumbai:

Ajinkya Rahane admits he was stunned to be named India captain for their upcoming Zimbabwe series, after being dropped just a week earlier, and while he plans to draw inspiration from past skippers he also wants to make his own mark on the team. (Dhoni, Kohli Rested; Rahane to Lead)

Rahane, who averages a tad over 30 in one-day internationals, played the first of India's three-match series against Bangladesh at Mirpur and scored nine off 25 balls as they went down by 79 runs.

He was dropped for the next two matches, with regular captain Mahendra Singh Dhoni saying the 27-year-old's batting was more suited to pitches offering more pace. (Rahane Has Come of Age: Vengsarkar)

But that did not stop India from putting Rahane in charge of a second-string squad for this month's tour of Zimbabwe for three ODIs and two Twenty20 internationals while resting Dhoni and a host of other senior cricketers.

"The decision of naming me captain did come as a surprise because I wasn't thinking about captaincy ever," Rahane, who has played 55 ODIs, told the Indian cricket board's website (BCCI.TV). "I didn't know how to react when I heard the news. (Rahane 'Sincere, Hard-Working': Tendulkar)

"Once the news slowly began to sink in, I became really confident of handling this new responsibility." (Rahane Seeks Dhoni's Calmness, Kohli's Aggression)

The 2-1 ODI series loss was India's first to Bangladesh, and another loss against Zimbabwe would not go down well with the country's cricket-crazy fans despite the lack of senior players in the touring party.

Rahane, a regular in India's Test side, has had the opportunity to play under Dhoni, new Test captain Virat Kohli and also former skipper Rahul Dravid while playing for the Rajasthan franchise in the Indian Premier League.

He said he would try to emulate different qualities from all of them.

"Firstly, playing under MS Dhoni I would observe how he would be calm on the field. He has a very peculiar and calm way of handling situations," the Mumbai batsman added. "I would like to take that quality from him.

"What I would like to take from Virat Kohli would be controlled aggression. You can see that quality in his batting and his captaincy.

"And finally, Rahul bhai is someone who likes to keep things really simple on the field, which I got to know while playing under him with the Rajasthan Royals.

"Having said that, I have my own set of ideas and I know what I have to do on the field."

Comments
Topics mentioned in this article
India Cricket Team Zimbabwe Cricket Team Ajinkya Rahane Zimbabwe vs India 2013 Cricket
Get the latest Cricket news, check out the India cricket schedule, Cricket live score . Like us on Facebook or follow us on Twitter for more sports updates. You can also download the NDTV Cricket app for Android or iOS.