Zimbabwe were mauled 0-5 in the series by a team, which did not feature some of its key players including regular skipper Mahendra Singh Dhoni. 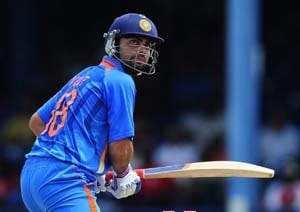 Demolished in the just-concluded ODI series against India, Zimbabwean players were sent to the rival dressing room by their coach Andy Waller to gather some cricketing tips from Virat Kohli and his men.

"They're in the changing room with (India) now, to talk to them," Waller said at the post-match press conference after the fifth ODI here.

"The best time to learn is now in the change room with the best players in the world, and talking one-on-one when you're not shy talking out in the open. And our guys are quite bad like that.

"They don't go up and ask questions about cricket, and that's how you learn. And I'm hoping we try to change that culture. Hopefully they'll learn something from what they hear from the guys," he added.

Zimbabwe were mauled 0-5 in the series by a team, which did not feature some of its key players including regular skipper Mahendra Singh Dhoni.

Waller lauded Kohli for both his leadership as well as fine batting.

"You look at someone like Kohli for example," Waller said.

"He doesn't play risky shots. He plays good, simple cricket and he finds the gaps, whereas I think our guys try to improvise more than they should. That's something that we're working really hard at: trying to convince them that that's the way we should be playing cricket," he added.

Waller, however, said the IPL influence was making his players believe that the best way to score was hitting big shots.

"I think it's watching all this IPL and that sort of stuff that's got these guys thinking the only way you can score runs is hitting over the top and hitting sixes and fours," Waller said.

"The Indians have proved to us that that's not the case. They shoulder arms like they're playing Test cricket, but they're still getting the runs on the board, because they're waiting patiently."

Batsman Sean Williams, whose half-century was the lone bright spot in the poor batting effort by Zimbabwe in the fifth one-dayer yesterday, said his team is learning.

"I struggled with the bat in the first four games, but it was really a mindset of playing against the world champions," Williams said.

"It's a lot different to playing against other teams like Bangladesh, Kenya and Ireland. Once I overcame that, everything seemed to gel together. Obviously I'm not happy that I didn't finish it off, but it's getting better. I'm looking forward to Pakistan arriving," he explained.

Waller said Zimbabwe's progress is a long process and results should not be expected too soon.

"It's not something we can turn over in two or three months," said Waller.

"I'm not trying to make excuses, but it's a long process. It's a confidence thing. The guys haven't played hard, competitive cricket for three or four months now, and I think you'll find by the end of the Sri Lanka tour, playing more of that standard of cricket, the confidence will build up and we'll start improving."