Zimbabwe ahead despite a collapse

Zimbabwe and Bangladesh ended a competitive second day with the Test finely balanced between the sides. Bangladesh batted with a similar caution to the one Zimbabwe's batsmen implemented on a pitch that remains good for batting but offers something for the bowlers as well. 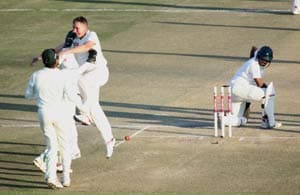 Zimbabwe and Bangladesh ended a competitive second day with the Test finely balanced between the sides. Bangladesh batted with a similar caution to the one Zimbabwe's batsmen implemented on a pitch that remains good for batting but offers something for the bowlers as well.

Zimbabwe's opening bowlers, debutants Brian Vitori and Kyle Jarvis, made a threatening start but Chris Mpofu and Elton Chigumbura operated as containing, rather than attacking, change-bowlers. Ray Price chipped in with economical overs towards the end of the day and worked to deceive the batsmen with generous flight.

Vitori and Jarvis made impressive starts to their international careers, bowling at good pace and extracting fine carry from the pitch. Left-armer Vitori got consistent away movement from the left-handers while bringing the ball into the right-handers. He controlled the short ball well and was rewarded when Imrul Kayes was forced to play at one that held its line and got an outside edge through to first slip. He dismissed Tamim Iqbal in similar fashion, making him play at a length ball that caught the edge and found a diving Brendan Taylor at second slip. Jarvis was the quicker of the two though he occasionally pitched it too full.

The pair proved a handful for Shahriah Nafees, who was dropped by Tino Mawoyo at third slip when he was on eight, and he shuffled through a frenetic first hour, looking restless and edgy. Nafees was allowed to become more comfortable after tea and judged when to leave with more assurance.

Mpofu and Chigumbura both bowled a focused line and continued to pepper Nafees and Mohammad Ashraful with short balls, though the strategy failed to make an impact. Even before the match started, Zimbabwe talked up using a back-of-a-length line to intimidate Bangladesh but Nafees and Ashraful contended with it admirably.

Ashraful played with almost Brendan Taylor-like patience, watching, leaving, and playing only when the occasion called for it. The bulk of his runs came in boundaries, with the pick of them being a straight drive that was pushed past the non-striker with impeccable timing. He held his own even when Nafees ran out of luck and was bowled by a Price delivery that popped off the bat and onto the bail. Together with Mahmudullah, he saw Bangladesh to a reasonably safe position overnight.

Zimbabwe would have been disappointed with their batting as their middle and lower order collapsed with eight wickets falling for just 66 runs. They showed only glimpses of the concentration and application shown by their top order, with poor shot selection costing them.

Shafiul and Robiul Islam began the morning with the opposite approach to the one they employed on day one and bowled wicket to wicket and fuller instead of wide of off-stump or too short, forcing defensive strokes and making it hard for Taylor and Hamilton Masakadza to score. After 13 overs, the pair had added just nine runs to the overnight total and appeared to be stagnating. 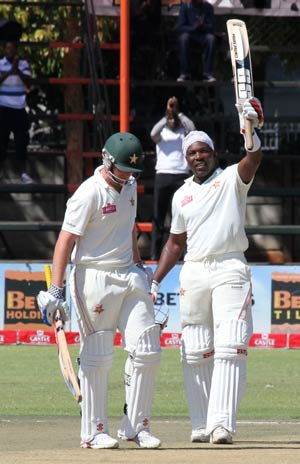 Masakadza eventually managed to bring up his second Test century with an elegant clip to square leg. His innings was a display of maturity and technical aptitude and once he reached his milestone he was able to play with more freedom.

Taylor, who had batted sedately for the most part of his innings, reached his 50 off 140 balls with a rare shot of aggression, a crunching cut. Just as Taylor and Masakadza were getting ready to up the tempo, Masakadza drove away from his body and found the edge, which was gobbled up by Kayes at first slip.

With that breakthrough, Bangladesh went into hunting mode and Mahmudullah was brought on after 19 overs. His only task was to remove left-hander Craig Ervine, which he did by trapping him lbw, and he was promptly taken out of the attack after two overs. Taylor crept back into his shell with those two losses and struggled with his footwork, causing his own undoing, when he slashed at a Robiul delivery and was caught behind.

The panic set in when Shakib Al Hasan removed Elton Chigumbura on the stroke of lunch, with the former captain getting a top edge in his attempt to sweep, giving Bangladesh bragging rights after the first period. They kept up the intensity after the break with Shakib keeping five men around the bat. Rubel Hossain showed the same aggression in bowling to the lower order and removed Price but it was Shakib who made big breakthroughs, enticing Tatenda Taibu forward with a full delivery and getting Vitori to hole out to deep midwicket.