Veteran South African and Royal Challengers Bangalore coach reveals Kohli apologized after the IPL spat with Gautam Gambhir. It was an indication that Kohli was ready to learn from mistakes, feels Jennings. 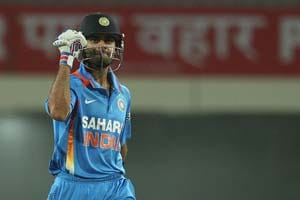 Former South Africa and Royal Challengers Bangalore coach Ray Jennings says Virat Kohli has all the makings of a great captain. In his first full series as skipper, Kohli scored a classy 115 as India cantered past Zimbabwe by six wickets in the first One Day International at Harare Sports Club on Wednesday.

The 24-year-old Delhi youngster is in the form of his life as Kohli is the only batsman to post five centuries in eight consecutive innings. (All the stats) His 15th ODI century on Wednesday, apart from being a statistical milestone, established his ability to take responsibility as a leader. Jennings, who has seen Kohli from close as part of the RCB team management in the Indian Premier League, feels Kohli is India's heir apparent.

In an interview to www.dnaindia.com, Jennings was full of praise for the temperamental Kohli, who is leading India in the five-match ODI series versus Zimbabwe as regular skipper Mahendra Singh Dhoni has taken a small break from international cricket. (Also read: Blog - Kohli, Indian cricket's heir apparent?)

"Virat is a very different kind of a leader. He is someone who leads from the front, someone who loves to make significant contributions with the bat and as a fielder. He has all the makings of a great captain," said Jennings, who was South Africa's chief coach in 2004. (Also read: Kohli - the skipper - slams ton, breaks record, credits team)

Jennings feels Kohli is not the regular Indian cricketer who is docile by nature. While Kohli has dazzled with the bat for Team India in ODIs -- top-scorer in a calendar year three times in successive years from 2010 to 2012 -- his angry demeanour has often put him into trouble. Jennings compares Kohli aggressive nature to that of an Australian.

"You can compare Virat to, say, the Aussies. Like them, he is aggressive. He is not your normal Indian guy. But the good thing is he loves responsibility. And I have seen him speak to players at RCB. He helps them set goals and makes sure they work towards those goals," said Jennings. Kohli's ability to learn from mistakes will take him miles, feels the 58-year-old Jennings. The South African revealed that Kohli was apologetic after his on-field spat with senior Indian opener and Kolkata Knight Riders skipper Gautam Gambhir during an IPL 2013 derby.

"He (Kohli) admitted he made a mistake. The good thing is he is young and prepared to learn. Give him time. And make no mistake, Virat wants to lead. There are people who are given the job they never wanted. Remember the musical chairs in Sri Lanka?" Jennings opined.

Analyzing Kohli's ability to score big knocks, Jennings explained that beneath a volatile persona, lies a calm mind. "You need to look at Virat as a person. A lot of people underestimate him. How can he score so heavily if he is not calm? As a person, he is aggressive. Being aggressive is not wrong. It's got to be a mix of both. Being too calm is also a problem," Jennings said.

Jennings wants Kohli to work on his man management skills. With age on his side and in no tearing hurry to occupy the hotspot in Indian cricket, Kohli can only get better, feels the veteran South African.

Comments
Topics mentioned in this article
Cricket Zimbabwe vs India 2013 Virat Kohli Raymond Vernon Jennings Royal Challengers Bangalore Zimbabwe Cricket Team India Cricket Team
Get the latest Cricket news, check out the India cricket schedule, Cricket live score . Like us on Facebook or follow us on Twitter for more sports updates. You can also download the NDTV Cricket app for Android or iOS.