The 27-year-old Rayudu scored an 84-ball 63, forging a crucial 159-run partnership with skipper Virat Kohli that guided India to victory in the opening ODI against Zimbabwe yesterday. 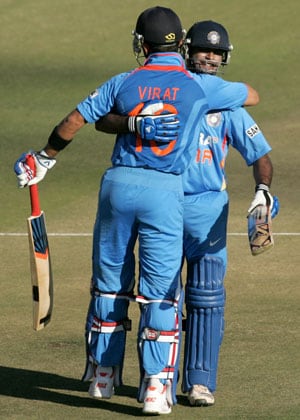 Elated after a successful ODI debut following years of struggle, Indian batsman Ambati Rayudu thanked Sachin Tendulkar for helping him through the tough days of waiting.

"Sachin (Tendulkar) and Robin Singh especially. They've helped me a lot, and I'd definitely like to thank them for that," Rayudu said.

"I always had the belief that if I could get things right and I could get my mind right I could make it into the team one day, and I'm really happy that I got my chance today," he added.

The 27-year-old Rayudu scored an 84-ball 63, forging a crucial 159-run partnership with skipper Virat Kohli that guided India to victory in the opening ODI against Zimbabwe yesterday.

"It feels marvellous. It's been pretty emotional," he said.

"More than nervous, I was very emotional," he added.

Rayudu lauded Kohli, whose swashbuckling hundred blew away the Zimbabweans.

"I definitely feel that he's the best in the world right now in the one-day format. He made it a lot easier for me, and I was just looking at the way he was constructing his innings. It's a very good learning experience," he added.

Rayudu, who has played 80 first-class matches averaging over 46 for his 5183 runs, also thanked his family for standing by him during the struggling days.

"My family, my friends and especially the Mumbai Indians support staff (have been there for me)," Rayudu said.

Comments
Topics mentioned in this article
Cricket Robin Singh Sachin Ramesh Tendulkar Zimbabwe vs India 2013 Subramaniam Badrinath Ambati Rayudu BCCI Mumbai Indians
Get the latest Cricket news, check out the India cricket schedule, Cricket live score . Like us on Facebook or follow us on Twitter for more sports updates. You can also download the NDTV Cricket app for Android or iOS.