His wait for ODI debut was a bit prolonged for the 24-year-old but once Mohit Sharma got a chance, he made the most of it to wreck Zimbabwe's prospects. 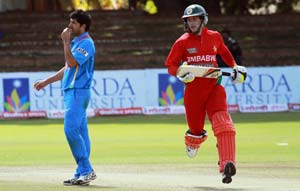 Mohit Sharma's two wickets and an extremely tight spell on Thursday helped India crush Zimbabwe in the fourth ODI. The 24-year-old also became the second India player - after Sandeep Patil in 1980 - to bag a Man of the Match award on ODI debut.

Picked to play in the Bulawayo ODI, Mohit was given the new ball and he was on the job from the word go. He managed to beat the edge of the bat on several occasions before being rewarded for his perseverance - Sikandar Raza dabbing at a slightly outside off-stump delivery only to knick it back.

Sharma had a decent outing for Chennai Super Kings in the Indian Premier League earlier this year with 20 wickets from 15 matches. His wait for the national colours since was a bit prolonged but childhood coach Vijay Yadav told him to stick it out.

"After the third ODI, Mohit rang me up. He sounded worried and nervous. 'Sir, three matches gone and I haven't played yet'," Yadav was quoted as saying by DNA. "I told him to be patient. And he said he was itching to do well if given a chance. I am glad he bowled well on debut."

With the likes of Bhuvneshwar Kumar and Ishant Sharma expected to make their return in upcoming tournaments, Mohit may yet find it tough to have a more permanent place in the side. The bowler from Ballabhgarh in Haryana though has shown that given a chance, he will fire on all cylinders.

Comments
Topics mentioned in this article
Cricket Zimbabwe Cricket Team India Cricket Team Zimbabwe vs India 2013 Bhuvneshwar Kumar Sikandar Raza Ishant Sharma Mohit Sharma
Get the latest updates on IPL 2020, check out the IPL Schedule for 2020 and Indian Premier League (IPL) Cricket live score . Like us on Facebook or follow us on Twitter for more sports updates. You can also download the NDTV Cricket app for Android or iOS.