Under Virat Kohli's captaincy, India recorded their first-ever five-match ODI series whitewash on foreign soil after they thrashed Zimbabwe by seven wickets in the final match at Bulawayo. 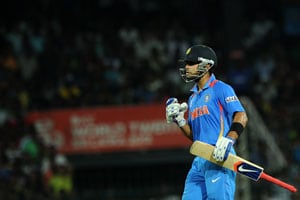 Virat Kohli, who led India to an emphatic 5-0 series whitewash over Zimbabwe, on Saturday credited his success as captain to Mahendra Singh Dhoni and said he is learning the tricks of the trade "from the big man himself". (Match report)

Under Kohli's leadership, India created history by recording their first-ever five-match ODI series whitewash on foreign soil after they thrashed Zimbabwe by seven wickets in the fifth and final cricket one-dayer here.

Asked how difficult was to captain the side, Kohli, who has led India in the series in Dhoni's absence, said, "It is a team of very talented players, it is not that difficult as captain, it is not difficult to motivate them. (Highlights)

"(It has) gone well so far, but I can only learn from the big man (Dhoni) himself. I have learned a few tactics from him and used them on the field," he said.

"I have not changed my attitude as far as batting goes, and tried to take responsibility in the middle order.

"It has been a beautiful thing to be part of this team and now to lead it. This is an eager bunch of 15 who have gone out there and performed," the talented right-hander added.

Riding on leg-spinner Amit Mishra's (6/48) career-best six wicket haul, India first bowled out Zimbabwe for a paltry 163 in 39.5 overs and then chased down the small target comfortably with 16 overs to spare at Queens Sports Club.

"To be honest, the first two games were pretty well fought out by Zimbabwe, but we stepped up in the next three. I am pretty happy with the way the guys have played in the series," Kohli said about the series which India pocketed with consummate ease. (Related: Omar Abdullah lashes out at BCCI for not fielding Parvez Rasool)

After India took an unassailable 3-0 lead in the series, the team management was expected to give all the bench players a chance.

Quite a few of them like Mohit Sharma, Ajinkya Rahane and Cheteshwar Pujara got the call in the last two ODIs except for Jammu and Kashmir all-rounder Parvez Rasool, who now has to wait for some more time to make his international debut.