India have won eight successive games this year - one vs West Indies, two vs Sri Lanka followed by five vs Zimbabwe in the just concluded series. 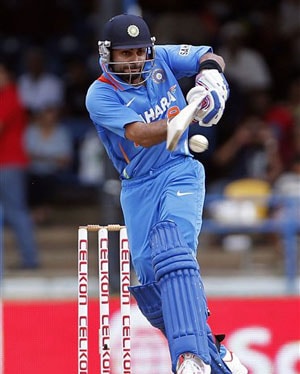 # India have won eight successive games this year - one vs West Indies, two vs Sri Lanka followed by five vs Zimbabwe in the just concluded series.

# Amit Mishra's excellent figures of six for 48 are his career-best in ODIs, obliterating the 4 for 31 vs West Indies at Port of Spain on June 8, 2011.

# Mishra's aforesaid figures are the third best by an Indian bowler at number sixth position, next only to the six for 12 by Anil Kumble vs West Indies at Kolkata on November 27, 1993 and six for 27 by Murali Kartik vs. Australia at Wankhede Stadium, Mumbai on October 17, 2007. (Highlights)

# Mishra's figures of six for 48 are the seventh best at number sixth position in ODIs - the best being Shahid Afridi's 7 for 12 vs West Indies at Providence on July 14, 2013.

# Mishra is the first bowler to take six wickets in India-Zimbabwe ODIs, surpassing the five for 27 by Irfan Pathan at Harare on August 29, 2005.

# Apart from Mishra, Kumble and Kartik, Ajit Agarkar, Ashish Nehra (twice) and Sreesanth are other Indian bowlers to have captured six wickets in an innings in ODIs.

# Mishra is the third bowler to capture six wickets in an innings vs Zimbabwe in Zimbabwe in ODIs, joining Fidel Edwards (WI) and Ajantha Mendis (Zimbabwe).

# Mishra's aforesaid tally is also a record by a spinner in a bilateral series in ODIs, surpassing Ajantha Mendis' 15 (ave.8.60) in five matches vs Zimbabwe in 2008-09. 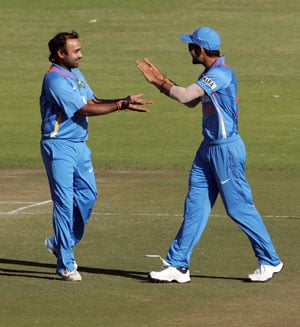 # Mishra has received his second Man of the Match award in ODIs - his first was also against Zimbabwe at Harare on July 28, 2013.

# Brendan Taylor has recorded successive ducks for the first time in ODIs. In his last four innings, he has registered three ducks. In a five-ODI series, he is the only captain to post three ducks.

# For the first time in an ODI series, Taylor has registered three ducks. His series average is 7.00 - 35 runs in five innings with a strike rate of 42.16.

# Elton Chigumbura, with 159 runs at an average of 53.00 in five matches, has topped the run-charts for Zimbabwe in the just concluded series.

# Dinesh Karthik took his tally of dismissals to 9 - all caught - his best performance in a series.

# Shikhar Dhawan became the first Indian batsman to manage 200 runs in the just concluded series - 209 at an average of 52.25 in four ODIs.

# Ravindra Jadeja (48 not out) is averaging 87.50 vs Zimbabwe in ODIs - his aggregate being 175 in four innings (twice not out), including two fifties.