27-year-old Raza knows he has got to take every chance that he gets but won't put undue pressure on himself. 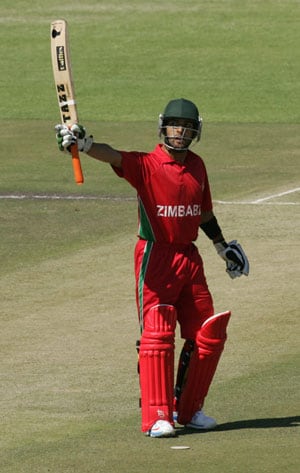 Playing the best knock of his short international career does not satisfy Sikandar Raza Butt. Instead, it is the disappointment of missing out on a hundred against the world champions haunts him more. (Read 2nd ODI preview)

Playing just his third ODI, Raza top scored for Zimbabwe with 82 to help Zimbabwe to 228 for 6, which the Virat Kohli-led India chased down within 45 overs.

"A friend of mine just asked me something," he said after Zimbabwe's six-wicket defeat to India. "He asked me: 'How did it feel when Virat got his hundred?' I tell you, that question stung me properly. I'm going to remember that for the rest of my life. I'm not going to find these opportunities a lot, so when I do I'm going to have to make sure that I convert them," Raza said in the post-match press conference at the Harare Sports Club on Wednesday.

The Sialkot-born right-hander's childhood dream was to become a fighter pilot in Pakistan. However a failed eye test quashed his ambition but did not demotivate him to achieve big in life. At 27 years old and now only beginning his international career, he knows he has got to make use of every chance he can.

"I'll definitely be in the nets after this press conference," he said. "I've got a few areas to brush up on, so that if I find myself with the same opportunity, I'm not putting myself under pressure and neither am I putting my team under pressure."

After losing the toss on a lively pitch first thing in the morning, Zimbabwe were indeed under pressure from the very start. "History tells us that at [Harare] Sports Club batting first is always very tricky," Raza said. "It was nipping around. From one side it was skidding and from the other side it was not coming on to the bat. That was happening, along with the movement and seam, so it was quite tricky to bat. So what we decided was that we're going to keep wickets in hand, because that would give our team a better chance to post a competitive total."

He summarizes his batting technique as "see ball, hit ball, and try to survive mate". Raza once shared a 98-run partnership with legendary Brian Lara in Zimbabwe's domestic Twenty20 competition to which Lara contributed just 11. On Wednesday, he presented the defensive bat to the ball more than the slogs and yet finished with a strike rate of 73.21, six fours and two sixes.

"The flair will stay there, and I hope it stays there for the rest of my career," Raza said. "But the fact is when you're playing international cricket at such a high level you're not going to get bad balls and if I'm trying to make something out of nothing I'm going to throw my wicket away.

"I would love to play my cricket with a lot of flair but unfortunately that doesn't always happen after just four ODIs. Hopefully as I keep on playing, I can start playing more shots. But at the moment, the plan we set, we have to stick to that so that it gives me and my team the best opportunity."

With his brother and several cousins - all wearing 'Team Raza' t-shirts - cheering him on, Raza was in sight of his ton when he was bowled by Amit Mishra.

Raza will get another opportunity to express himself on Friday in the second ODI, but he insists that success in this series is more important to the team than it might be to him personally. Zimbabwe have struggled to convince many top teams to play in the country and they understand what a big opportunity a visit by India offers.

"This is a massive tour, for Zimbabwe to start with and then individually for me as well, because it could be make or break for us," he concluded. "So if we do really well here, hopefully we'll have more cricket coming to us, which could only help us improve."

World Cup An "Obsession", India Will Do All To Fulfil That Ambition: Coach Ravi Shastri

Ashleigh Barty Breezes Into Next Round At Windswept Australian Open
Advertisement