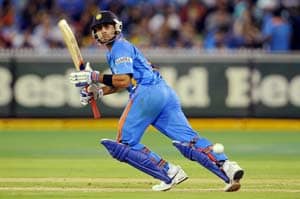 Virat Kohli had said he would lead India in Zimbabwe by setting examples. His 115 in the opening match at the Harare Sports Club on Wednesday helped India register a comprehensive 6-wicket win after the home team scored 228 for seven wicket in their 50 overs.


Scorecard | Match as it happened

Kohli came to the middle to replace Shikhar Dhawan (17) who was dismissed quite early into the chase. The young skipper lost Rohit Sharma (20) at the other end and it appeared as if the Zimbabwean bowlers might make the most of a track that offered considerable seam and bounce. A seasoned campaigner though, Kohli was quick to wrest the advantage as he slapped 13 boundaries and a six- partnering Ambati Rayudu (63*) in a decisive 159-run third-wicket stand. (Match in pics)

Even though India won with 5 overs to spare, the hosts too had a couple of positives to take from the rather one-sided contest.

In particular, Sikandar Raza and Elton Chigumbura were the two stand-out men, who managed to ensure that the Indians were made to analyse their bowling plans. Asked to bat first, Raza gave his side a watchful start and yet - en route to a 112-ball 82 - showed that he has the aggressive shots in his arsenal as well. His innings had six boundaries and two mighty sixes.

Raza's eventual dismissal - he was one of spinner Amit Mishra's three victims - brought a frown on the faces of the local fans but Chigumbura's late surge erased all of it. The 27-year-old hit an unbeaten 43 from 34 deliveries to help his side to a respectable total. The second ODI is scheduled for Friday (July 26).