Deepak Punia is currently training in India, and the WFI chief feels the postponement of Tokyo Olympics has given him more time to fine-tune his skills. 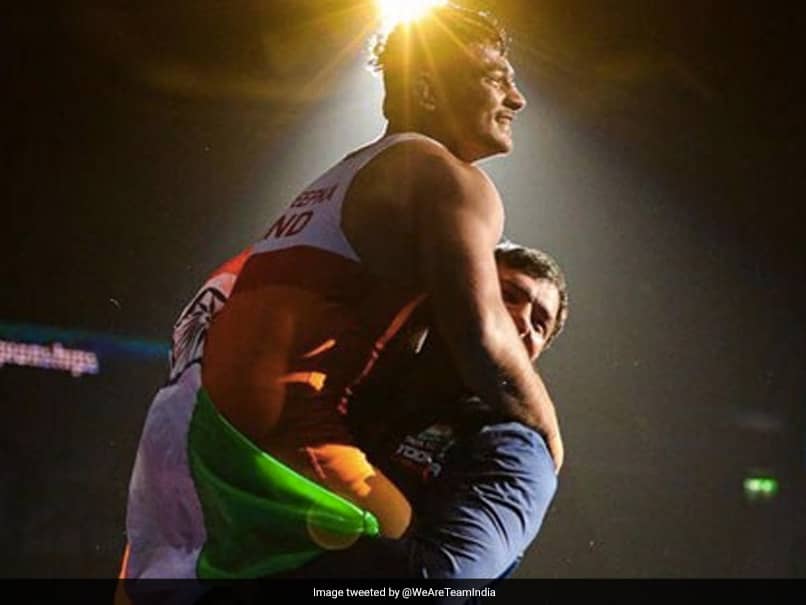 Deepak Punia will be aiming for glory in the upcoming Tokyo Olympics.© Twitter

The WFI president also pointed out that the Tokyo Olympics which was pushed back by a year due to the coronavirus pandemic has given time to Deepak to hone his skills further.

"I am banking upon Bajrang, Vinesh and Ravi, as we all know these three are the major force to reckon with. Deepak Punia is also in the line as I feel he would have been benefited by the postponement of Tokyo Olympics," Brij Bhushan told ANI.

Vinesh, who is a part of the Target Olympic Podium Scheme, has been training with her personal coach Woller Akos, her sparring partner Priyanka Phogat and her physiotherapist Poornima Raman Ngomdir in Szczryk in Poland.

On the other hand, Bajrang is currently in a training camp at Cliff Kean Wrestling Club in Michigan, the USA and has had his camp sanctioned for an additional one month.

Moreover, there are 18 Olympic categories, and wrestlers still have the opportunity to win more quota places at the Asian qualifiers and World Qualifiers this year.

"We have sent Bajrang and Vinesh for training abroad. Ravi and Deepak Punia are currently training in India. If they want they will be sent for training abroad," said Brij Bhushan on the sidelines of the 65th national freestyle senior wrestling championship.

"The sporting action was halted for ten months and during the World Cup, I realised that the lack of training due to the pandemic had impacted the performance of the players. So keeping that in mind, we started sporting action from the National Championships," he explained.

The WFI president feels the showpiece (Tokyo Olympics) event will surely take place this year and is vouching for at least four medals in the mega event.

"See vaccine for coronavirus has come and we are wishing that the Olympics don't get postponed again. I had said earlier also and I am saying it again that we will win at least four medals in the Olympics (in wrestling)," he pointed.

The International Olympic Committee (IOC) last week reiterated its stand that the body is fully committed to the successful delivery of the Olympic and Paralympic Games Tokyo 2020 this year.

IOC''s statement came after rumours that the event might have to be cancelled. The organisers on Friday said that the Japanese government is "fully focused" on hosting the Tokyo Olympics this summer.

The Olympics supreme body said that "all parties involved are working together to prepare for a successful Games this summer".