MS Dhoni, the India captain, identified Zaheer Khan's dismissal of Devon Smith in the first over of his second spell as the turning point of the match at Chepauk. 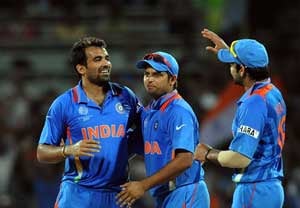 MS Dhoni, the India captain, identified Zaheer Khan's dismissal of Devon Smith in the first over of his second spell as the turning point of the match at Chepauk. Zaheer had only bowled two overs in his first spell and was, presumably, being saved for when the ball got a bit older and reverse-swing came into play. He struck with the older ball, in the 31st over, with a slower ball that bowled Smith, who had anchored West Indies' chase with a well-compiled 81.

"The game really changed once Zaheer gave us the breakthrough; until then Devon was batting really well," Dhoni said at the post-match presentation. "After that we could apply pressure from both ends, and eventually we got more wickets than we needed and we seized the game in the end."

Prior to Zaheer's strike, West Indies had eased their way to 154 for 2 with first Darren Bravo and then Ramnaresh Sarwan building fifty partnerships with Smith. The game seemed to be slipping away from India, but the fall of Smith's wicket allowed Dhoni to attack - at one point he had three close-in fielders for Harbhajan Singh - and West Indies crumbled under the pressure.

India's performance with the bat had been reminiscent of the performance against South Africa in Nagpur. This time it was Yuvraj Singh's turn to score a century, only to see the position he had brought India to squandered by a late collapse. India lost their last seven wickets for 50 runs, with four falling for just 28 after Yuvraj's dismissal in the 45th over.

Against South Africa, the collapse had been 9 for 29, and Dhoni recognised that losing wickets in a flurry at the end of the innings was becoming a problem for India, particularly because it wasn't allowing them to take advantage of the batting Powerplay.

"It [losing wickets] is a concern. But there is a gradual improvement and I am sure we will be at our best in the quarters. That's the positive I will take out of this."

India's 80-run win set up a quarter-final with Australia, to be played in Ahmedabad on March 24. They have lost to Australia in nine out of 15 matches played in India during the last five years, and Dhoni was aware of the challenge ahead of his team.

Comments
Topics mentioned in this article
Cricket World Cup 2011 India Cricket Team MS Dhoni Yuvraj Singh Suresh Raina
Get the latest updates on ICC T20 Worldcup 2022 and CWG 2022 check out the Schedule, Live Score and Medals Tally. Like us on Facebook or follow us on Twitter for more sports updates. You can also download the NDTV Cricket app for Android or iOS.