It's evident, isn't it - bowling isn't India's strong suit… and yes I have heard all this talk about playing to your strengths. It's evident, isn't it - bowling isn't India's strong suit... andÂ  yes I have heard all this talk about playing to your strengths, but in a limited over game,Â  if 6 batsmen don't work, then 7 won't... But batting later - first, my common sense gyan about India's bowling woes.

India has so far played 2 spinners Chawla and Harbhajan , and Zaheer and Munaf as the new ball options. Interestingly, while other teams like South Africa have tossed the new ball to a spinner, India has preferred to stick to medium- fast bowlers (make that more medium than fast - either seldom bowls over 135 kmph at their fastest).

As I watched India bowl at Ireland today, something that was almost self-evident struck me hard. Sure, Ireland got just 207, but both our spinners had been far from impressive.

Against Ireland, Bhajji bowled his 9 overs for 29 but got just the 1 wicket. Chawla bowled his 8 overs for 56 runs and went wicketless.Â  17 overs -75 runs and 1 wicket from 2 of India's main bolwers. Compare this to the two people who in Dhoni's lineup make up the 5th bowler - Yuvraj Singh and Yusuf Pathan. Today Yuvi was on song - got 5 wickets - but between the two of them they also got 17 overs in. 17 overs -63 runs and 5 wickets.Â  And if that made you say 'Whoa!', hold that - there's more...

Harbhajan's 2 wickets in 3 matches have cost him 64 runs a piece - that when 2 of the matches were against so-called 'minnows' - Bangladesh and Ireland. Chawla has played 2 matches - and his 2 wickets - both in the England game has cost him about the same. Compare the runs per over - and Bhajji has had a better time - conceding just four-and-a-half, Chawla has been taken to the cleaners - the English and IrishÂ  managed over 7 runs from each Chawla over.
Compare that to Zaheer's 8 wickets at 16 aÂ  piece, or Munaf's 7 at 20, and you'd know why I said the bowling woes were self evident...

Before I move on to my prescription - here's the curious case of Mr Yusuf Pathan. He biffs the ball a long way and turns his arm over - a sort of a half bowler who makes up number 5.Â  And here's where it gets curiouser - Mr Pathan has in the 2 matches before the Ireland game scored just 22 runs in the tournament - and when it comes to bowling he's bowled 18 overs - picking up just the 1 wicketÂ  and giving away almost 6 runs an over. Yet the wiseÂ  men of cricket ( and skipper Dhoni , et al) consider him a critical part of team . So am I the one missing something - or is it just the case of people's vision being coloured by a couple of biffy innings in South Africa - and some lusty blows against the Irish? Perhaps the team management feels its necessary to have someone who gives the crowd its money's worth... then have the courage to drop one of your specialist batsmen - a Gambhir maybe - and let Pathan cliam his place in the side. Currently, it seems to be in place of a bowler, and his bowling isn't upto scratch.

So I don my 'Dhoni' cap - and muster the courage to say the unspeakable in the Indian cricket... play 5 bowlers, it may be important, not just to contain sides but also to defend totals... totals that have tended to be northwards of 300 this World Cup.

Drop Chawla - More than anything, his confidence seems to have taken a beating - and bring in Ashwin. 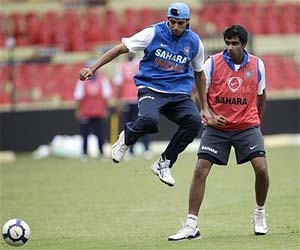 Ravichandran Ashwin is a better bat, and definitely a more restrictive spinner. He isn't a tourist on the squad, is he... and he would complement Harbhajan quite well. Besides, if we must give him match practice, then the knockout stage isn't really the right place to start.

Should courage find its way to the captain, then here's the second bitter pill for Dhoni - drop Pathan and get in Ashish Nehra. The team could do with 5 bowlers - then between Yusuf and Yuvi, whatever they bowl is a bonus. Look at it another way, it covers for someone having a bad-bad night. Again, if Nehra is indeed match fit, no better way of testing it, is there...

Besides, Nehra has picked up 154 ODI wickets at an average of 31, and does exceedingly well in the World Cup where he averages 19. So, if he is fit, and given the stage, the man does have a habit of picking up wickets.

In Ashwin's case, when he played for the Chennai Super Kings, he was Dhoni's go to man. Besides, in the 7 one-dayers he has played, Ashwin has picked up 14 wickets at an average of 23, conceding under 5 runs an over.

So while regular cricketing wisdom suggest that 2 off-spinners and 2 left arm seamers may not be great - and 5 bowlers is a no-no, Mr Dhoni please think out-of-the-box. After all, there's a World Cup out there to be won, so put your best foot forward, or in this case, your best arm over... After all, if runs win matches, so do wickets...