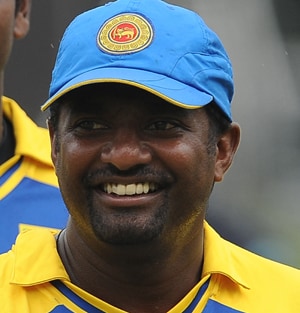 However, he insists that some umpires are scared to intervene, content to see the 38-year-old enjoy his World Cup swansong before slipping into international retirement.

"A couple of current umpires have said to me, 'something is wrong', but they prefer to let it go," Hair, who quit in 2008, told Australian media on Saturday.

"There is still a lot of doubt about his deliveries.

"A few have told me, 'There is definitely something wrong with his action, but I'm not going to call him'."

Muralitharan has been cleared by the International Cricket Council (ICC) after undergoing biomechanical tests on his controversial action.

But the debate continues to polarise opinion.

"I watched a few of his deliveries against Pakistan and I noticed the last few overs when he was really getting some turn on the ball, those wouldn't have complied under scrutiny," claimed Hair.

"But this is his last World Cup, he's going to bow out with a lot of fanfare and no umpire will be bothered by it."

Muralitharan, who has a record 523 ODI wickets and 800 Test victims, will line up against Australia at the R. Premadasa stadium in Colombo in Saturday's crucial Group A match.

Sri Lanka, the 1996 champions and 2007 runners-up to Australia, could field three spinners with Ajantha Mendis and Rangana Herath expected to play on the dead-slow pitch.

Sri Lanka, with two wins and a defeat so far, will also be looking for another sensational display from seamer Lasith Malinga, who delivered a career-best 6-38, including a second World Cup hat-trick, against Kenya.

Australia captain Ricky Ponting, whose side have two wins in two matches, said his team has a plan to counter Malinga's distinctive, slingshot style.

"We have played a fair bit against Malinga over the years. Obviously he had a great game against Kenya, so he was one of the main focuses in our team meetings and we talked about the right ways to tackle him," said Ponting.

Meanwhile, angry fans attacked the house of Bangladesh captain Shakib Al Hasan after his team crashed to a humiliating nine-wicket defeat against the West Indies in Dhaka.

Shakib's mother and sister were inside the three-storey house in the western district town of Magura when several motorcycle riders stopped and threw stones at the house on Friday evening, local police chief Proloy Chisim said.

Bangladesh, one of the three co-hosts of the World Cup, were bowled out for their lowest one-day international total of 58 to leave them facing a huge struggle to secure a place in the quarter-finals.

Fans also stoned the bus carrying the West Indies team as the players were leaving Sher-e-Bangla stadium after the match.

Police, who have made 38 arrests in connection with the attack, said fans thought it was the Bangladeshi team bus and hurled stones at it, shattering two windows.

Up to 3,000 fans also torched Bangladesh jerseys and held protest marches on the Dhaka University campus to vent their anger at the loss.

Comments
Topics mentioned in this article
Australia Cricket Team Muttiah Muralidaran World Cup 2011 Cricket
Get the latest updates on ICC T20 Worldcup 2022 and CWG 2022 check out the Schedule, Live Score and Medals Tally. Like us on Facebook or follow us on Twitter for more sports updates. You can also download the NDTV Cricket app for Android or iOS.