New Zealand media bemoaned the Black Caps' World Cup 'jinx' on Tuesday after yet another semi-final exit, but praised the unheralded team for exceeding expectations in reaching the final four. 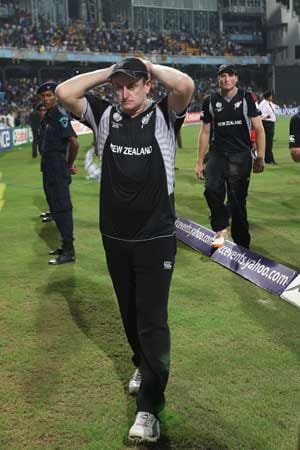 New Zealand media bemoaned the Black Caps' World Cup 'jinx' on Tuesday after yet another semi-final exit, but praised the unheralded team for exceeding expectations in reaching the final four.

"It was deja vu all over again," national news agency NZPA said after Sri Lanka sent New Zealand packing at the semi-final stage for the sixth time in 10 World Cups. The team has never reached a tournament decider.

The New Zealand Herald said the Black Caps "almost broke the jinx" only to fall short against a powerful Sri Lankan outfit, going down by five wickets but giving their opponents some nervous moments on the way.

"They deserve suitable plaudits for a gallant effort," it said.

Fairfax Media described New Zealand's loss as "agonising" but conceded it had an air of inevitability after the batting line-up managed a meagre total of 217 runs, giving the bowlers little to defend.

"They talked a brave game and genuinely believed they could beat the odds again - as they did four days earlier by upsetting South Africa in Dhaka," it said.

"But after posting such a small total from their 50 overs, the New Zealanders would have known they hadn't done enough."

NZPA singled out the "brilliant" quarter-final win over South Africa, when the Black Caps' aggression and tight fielding rattled the Proteas, as a tournament highlight.

The NZ Herald praised coach John Wright for turning around one of the worst slumps in form in the New Zealand team's history since his appointment last December, saying some of his grit had rubbed off on his charges.

"Wright's appointment as coach can only go so far by way of explanation for the team's resurgence of late... but this demonstration of heart was foremost generated by the players," it said.

While crediting the Black Caps' fighting spirit and tenacity, NZPA was not overenthusiastic about a side with a sometimes patchy bowling attack that remains prone to batting collapses.

"The harsh reality is they won two matches, against Pakistan and South Africa, and lost three, to Sri Lanka twice and Australia, against recognised teams -- not the sort of strike rate that can be labelled successful," it said.

Comments
Topics mentioned in this article
New Zealand Cricket Team Pakistan Cricket Team Cricket World Cup 2011
Get the latest updates on ICC T20 Worldcup 2022 and CWG 2022 check out the Schedule, Live Score and Medals Tally. Like us on Facebook or follow us on Twitter for more sports updates. You can also download the NDTV Cricket app for Android or iOS.