South African skipper Graeme Smith has saluted the Eden Gardens, where his side humbled Ireland to cruise into the World Cup quarterfinals, saying every cricketer wishes to experience the excitement of playing at the historic venue. 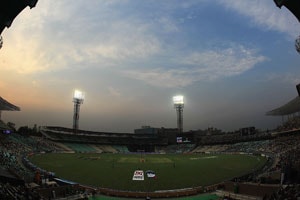 South African skipper Graeme Smith has saluted the Eden Gardens, where his side humbled Ireland to cruise into the World Cup quarterfinals, saying every cricketer wishes to experience the excitement of playing at the historic venue. (Also Read: South Africa silence Irish giant killers)

"I think traditionally it has one of the biggest crowds, whether it is a game against India or any other big game. All of us have good memories of playing here in the previous years," the South African skipper told media persons after the 131-run victory over Ireland on Tuesday night.

Lauding the electrifying atmosphere which is part and parcel of the ground, that saw around 20,000 spectators in Tuesday's game, Smith said: "We have seen exciting games. It is one of the big stadiums in the world and you want to experience playing here. Like Lord's, or like MCG (Melbourne Cricket Ground)."

The iconic Eden Gardens, which hosted India's second ever Test match way back in 1934 and the World Cup final 24 years back, staged its maiden encounter of the current World Cup Tuesday after having lost its only tie involving India (opposite England) due to what the game's apex body International Cricket Council called delay in preparing the stadium.

It is slated to hold two more matches, all involving lesser known teams this week. While Ireland meet the Netherlands on Friday, Kenya and Zimbabwe clash on Sunday.

Comments
Topics mentioned in this article
Graeme Smith World Cup 2011 Ireland Cricket Team Cricket South Africa Cricket Team Eden Gardens
Get the latest updates on ICC T20 Worldcup 2022 and CWG 2022 check out the Schedule, Live Score and Medals Tally. Like us on Facebook or follow us on Twitter for more sports updates. You can also download the NDTV Cricket app for Android or iOS.