The World Cup semi-final between India and Pakistan was billed as the match of the big statement. It was believed it would be dominated by an epic performance from a handful of cricketers who would make game-altering, life-changing contributions over 100 overs. 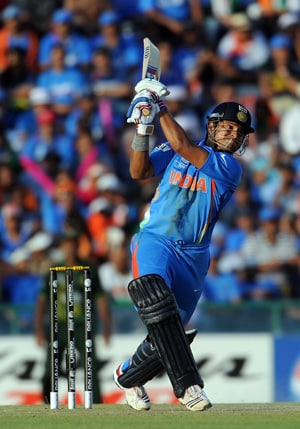 The World Cup semi-final between India and Pakistan was billed as the match of the big statement. It was believed it would be dominated by an epic performance from a handful of cricketers who would make game-altering, life-changing contributions over 100 overs. It would be a grand declaration of skill that befitted a contest watched by heads of state and government meeting at a cricket ground to talk about peace because a match had suddenly broken out in the neighbourhood.

Nothing of the sort. India's 29-run win over Pakistan was steadily carved out amid the heat and noise of Mohali not by its aristocracy but its plebs: the bit-part men who live in the halfway house between belonging and dispensability in the XI. Who can be picked and dropped at a fluctuating rate that is faster than the stock exchange.

The big occasion in Mohali today didn't quite find the alpha males. India's World Cup MVP was sent back home within a minute of arrival, by a swinging full-toss, and Sachin Tendulkar scratched out an 85 that was quite the opposite of one his many routine, treasured, "chanceless" innings.

It wasn't a night made by India's batsmen or even the improved Yuvraj Singh, now virtually considered the team's fifth bowler, in his new allrounder avatar, or even Zaheer Khan on a hot streak as a partnership breaker. The men who did the thorough rigorous housekeeping when 260 had to be defended were the ones who have not been certainties in an Indian starting line-up through the tournament.

Ashish Nehra and Munaf Patel will never make crowds go wild. What they did against Pakistan all through their multiple spells of right hand-left hand art, was to ensure that the oxygen levels during the chase began to slowly leak out.

It was Munaf who struck the earlier of the two, varying his pace - bowling some cutters and some that to the naked eye, never mind the speed gun reading of 140kph, looked quicker. He of the wild hair, big smile, relaxed manner and the most dangerous of variations, cracked open the Pakistani middle order. Munaf abhors width but he understands depth and significance. The wicket of Abdul Razzaq, who played securely for everything except the ball that was bowled to him, was to be the sign that India had switched on the exit sign for their neighbours.

Nehra was a man mercilessly pilloried for conceding 16 to South Africa in a final over during a group game in Nagpur. South Africa are heading home and Nehra is still around, pickpocket run-up, mournful game face and ability now to use his left-armer's approach to find invisible protractor angles to right-hand batsmen. He was brought into the game because, MS Dhoni confessed, the Indians had read the wicket incorrectly. Their choice of bowler to step in turned out to be right, though, and Nehra knew what had to be done, and particularly how, in Mohali where the ball begins swinging for about an hour and a half in the second session. He bowled in four spells on Wednesday unrewarded until his last two overs, when he cleaned up the tail, 7-0-22-0 turning into 10-0-33-2.

Pros like Nehra and Patel can run rings around batsmen unsure of themselves, like the Pakistanis were on Wednesday, and trip them up on those very rings. Dhoni said that while India's bowlers were far from express, their stock in trade was their deception and their ability to change length, line and speed depending on the conditions.

It could go unnoticed and he is definitely a bit-part player, but in the afternoon, Suresh Raina's innings of 36 became India's last push up the incline, after an early burst from the openers was turned into a long, dry passage in the middle. He came in at an awkward time, in the 37th over, and lost his senior partner, Dhoni, inside the next half hour. Stretching before Raina were more than eight overs with the tail for company and a final Powerplay to be taken. The batsman known best for his flamboyant shot-making went about his innings with faith in his partners, and surety and confidence in what he was doing. It was as if Raina had not stopped batting since the quarter-final in Ahmedabad.

Dhoni said Raina's had been an innings of measured calculation, particularly as he was batting alongside the tail. "It was important to rotate strike, and with their best bowlers bowling at that point, he had to make sure he had to bat the full number of overs and to see if he could capitalise on the Powerplay." India's track record in this World Cup's batting Powerplays had usually been centered around a collapse but against Pakistan, led by Raina it ended up being 43 for 1. Dhoni said that it was one of India's better Powerplay performances in the World Cup: "Even though there weren't two specialist batsmen we got a fair amount of runs and that really made a difference for us".

Raina's was an assured performance, not quite as dramatic as against Australia but as weighty. He decided the tone at which India would end their innings. With Harbhajan Singh and Zaheer Khan, Raina put up 51 for the seventh and eighth wickets. Take it away or halve it and Pakistan would have been able to stumble into the unexpected.

One member of India's star cast, though, did make an impact whose ripple effect started early in the afternoon and has ended up at the door of the World Cup final. Virender Sehwag's half- hour burst of 38 gave India its kickstart, first dismantling Pakistan's leading bowler and then maximising every scoring opportunity put before him. The difference between the two teams in the 15 overs was based on Sehwag's innings. It may have looked like a typical casual dash, but what was important in this innings was not the casualness but the dash.

Going into Mumbai, India have taken one step closer to the World Cup. If they played expansively and boldly in Ahmedabad, in Mohali they took what would be small, secure steps that could go virtually unheralded but did the business.

In the last week, over their two knockout games, where teams usually unravel, India have looked more and more sure of how they are going to get to their destination. They have won and lost tosses, they have chased and they have defended, and always they have known how to seize control. They are now the emphatic favourites to win the title, Mohali emphasising the chasm that now exists between India and Pakistan on the field. The rivalry is a heart-thumping business for the fans, but in the middle it is evident which team is accepted and recognised as better than the other.

In the dressing room India were watched by Mike Horn, adventurer extraordinaire, who has been speaking to the side about his experiences circumnavigating the Arctic Circle and going around the world without motorised transport. His presence has taken the ranks of the team's support staff to 12. In Mohali on Wednesday, though, it was the on-field support crew who proved they can soak up pressure like industrial-sized sponges. What were once considered the weak links of the Indian team have turned out to be its toughest cookies. And with no crumbling.

Comments
Topics mentioned in this article
India Cricket Team Pakistan Cricket Team Suresh Raina World Cup 2011 Cricket
Get the latest updates on ICC T20 Worldcup 2022 and CWG 2022 check out the Schedule, Live Score and Medals Tally. Like us on Facebook or follow us on Twitter for more sports updates. You can also download the NDTV Cricket app for Android or iOS.