The world number two, whose only other major crown came at the US Open last year, admitted the pressure of closing out the win was almost unbearable. 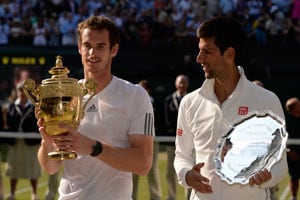 Andy Murray described the dramatic conclusion to his historic Wimbledon triumph as the hardest points he had ever played. (Match report)

Murray ended Britain's agonising 77-year wait for a Wimbledon men's singles champion with a 6-4, 7-5, 6-4 victory over world number one Novak Djokovic on Sunday.

The 26-year-old, who lost in a tearful Wimbledon final against Roger Federer last year, became the country's first male winner since Fred Perry in 1936.

And the world number two, whose only other major crown came at the US Open last year, admitted the pressure of closing out the win was almost unbearable.

"Probably the hardest few points I've ever had to play in my life," Murray said.

"I have played Novak many times and when everyone finishes playing, he will go down as one of the fighters.

"He did the same today and that is what made it tough. I understand how much everyone wanted to see a British winner at Wimbledon and I hope everyone enjoyed it."

Murray clambered into the players' box to hug his girlfriend Kim Sears, coach Ivan Lendl and the rest of his support team.

But he almost forgot his mother Judy, who was sitting just behind the box, before returning to give her a joyous embrace.

"I did forget Mum, but then I did remember," he added.

"My team have stuck by me through some tough moments. This one is for Ivan (Lendl, his coach) as well, I know he did everything to try to win this one when he was playing. He's fantastic, he's been patient and I thank him."

Murray's mother admitted she could barely remember how Murray actually won the final game because she had been reduced to a nervous wreck by that point.

"I was an emotional wreck but now it is the best feeling ever to watch your son win Wimbledon," she said. "I can't remember what happened in the last game but he was gutsy and determined to win that trophy today.

"I have been shaking for about three hours now. I have been around tennis for many years, you can never sit back and relax and think it is in the bag.

"The minute you start thinking too far ahead, it is dangerous. Never count your chickens, just be as supportive as you can be but he got through in the end."

Djokovic, who lost in straight sets at a Grand Slam for the first time since the semi-finals at Wimbledon three years ago, praised Murray.

"It wasn't easy. Andy deserves the win, he played incredible tennis. Congratulations to him and his whole team and the country, I know what it means to you all," said the Serb.

"It makes the success even bigger as I am aware of the pressure he gets. There are always lots of expectations on him to win this tournament. It's a great achievement."

"It's absolutely fantastic. It was the sheer will, that ability to find a way to get the job done when Djokovic would not go away," he told BBC Sport.

"He was serving for history, 40-0 up and Djokovic saved three match points.

"It's an unbelievable achievement for him and one we're all incredibly proud of. He always in his heart of hearts believed he could win the tournament.

"He had the huge disappointment of losing the final 12 months ago but knew he could do it."

"It is reality now, and for where he's come from and what he's gone through, it's an incredible performance," he said.

Comments
Topics mentioned in this article
Tennis Wimbledon 2013 Wimbledon 2011 Wimbledon 2012 Rafael Nadal David Ferrer Stanislas Wawrinka Roger Federer Bernard Tomic Novak Djokovic Andy Murray
Get the latest updates on IPL 2020, check out the IPL Schedule for 2020 and Indian Premier League (IPL) Cricket live score . Like us on Facebook or follow us on Twitter for more sports updates. You can also download the NDTV Cricket app for Android or iOS.