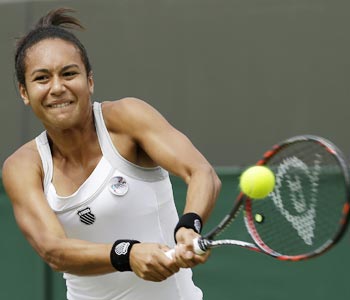 Heather Watson, who became the first Briton in 24 years to win a WTA title in Osaka last year, bowed to Puerto Rico's Monica Puig in the first round of the Japan Women's Open Monday.

Third-seeded Australian Samantha Stosur, the 2011 US Open champion, beat Johanna Larsson of Sweden 6-4, 6-2 to reach the second round of the tournament, carrying a total purse of $235,000.

The singles' field has been diluted by the 11th-hour withdrawal of top-seed Jelena Jankovic of Serbia due to pain in her lower back.

She was injured while losing 6-2, 6-2 to world number one Serena Williams in the final of the China Open in Beijing on Sunday, according to tournament organisers.

Canadian Eugenie Bouchard, seeded fifth, trounced Varvara Lepchenko of the United States 6-3, 6-0 in the other first-round singles match on the tournament's opening day at the Utsubo Tennis Centre in Osaka.

The 21-year-old Watson beat Chang Kai-chen of Taiwan in full sets in her first-ever WTA final at the Japan Women's Open last year. She has not won a WTA event since.

Comments
Topics mentioned in this article
Tennis Samantha Stosur Andy Murray Kaia Kanepi Heather Watson Na Li Andrea Petkovic Victoria Azarenka Agnes Szavay Monica Puig Wimbledon 2012
Get the latest updates on India vs Australia and check out  Schedule, Results and Live Score. Like us on Facebook or follow us on Twitter for more sports updates. You can also download the NDTV Cricket app for Android or iOS.