Tennis legend Rod Laver says 17-time Grand Slam winner Roger Federer will not quit the sport just because he had a bad season in 2013. 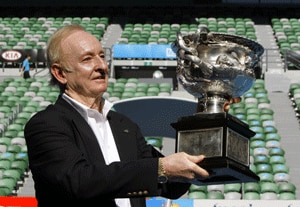 Legendary Rod Laver has full faith in Roger Federer's abilities and believes that the Swiss former world No.1 can put his recent slump in form behind by winning next year's Australian Open.

"It's a tough time. He's at 32, and not playing his best tennis by any means. It's hard to analyse someone of that ability. You might be surprised when you look at the champion of next year, it might be Roger because he's playing good tennis," Laver said on the sidelines of the launch of his memoir at Melbourne Park on Thursday.

Laver, the only player to win the calendar Grand Slam twice, says Federer will not retire from tennis after a bad season.

"Roger has had a great career, and I don't foresee him saying he's going to hang his racquets up because he's had a bad year," Laver was quoted as saying by sportal.com.au.

The 75-year-old also says that Federer's recent lean period is just a form issue rather than an indication of permanent decline.

"Once in a while it happened to me where for no reason... the day before you played a great tennis match and you got into the semi-finals - and the next match, you're just flat. What's happened? Is it your adrenaline? Is it your concentration? What is it that made you not play your best tennis?"

"I think that's going through a little of Roger's (thinking), because I saw him play at Wimbledon. The first match he played was perfect, great, and then the second, he loses a match he probably could almost win with his eyes closed. That's tennis," he added.

Federer started the year strongly after reaching the semis of 2012 Australian Open but was stunningly ousted from second round of Wimbledon and fourth round from the US Open. Meanwhile, Federer has reached the third round of Swiss Indoors in Basel after coming back from one set down to beat Denis Istomin 4-6, 6-3, 6-2 in the second round. The Swiss Maestro is still not a certainty for the season-ending ATP World Tour Finals.

Comments
Topics mentioned in this article
Tennis David Ferrer Roger Federer Stanislas Wawrinka Novak Djokovic Bernard Tomic Andy Murray Rafael Nadal Australian Open 2014 Wimbledon 2012
Get the latest updates on India vs Australia and check out  Schedule, Results and Live Score. Like us on Facebook or follow us on Twitter for more sports updates. You can also download the NDTV Cricket app for Android or iOS.