China's Zheng Jie set up a potential Wimbledon revenge mission against four-time champion Serena Williams as she eased to a 6-4, 6-2 second round victory over Canada's Aleksandra Wozniak on Thursday. 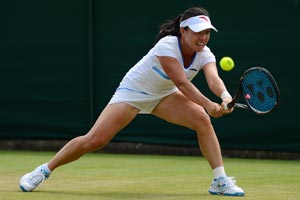 China's Zheng Jie set up a potential Wimbledon revenge mission against four-time champion Serena Williams as she eased to a 6-4, 6-2 second round victory over Canada's Aleksandra Wozniak on Thursday.

Zheng was defeated by Williams in the Wimbledon semi-finals in 2008 and will have a chance to avenge that heart-breaking loss in a third round rematch if the former world number one beats Melinda Czink later on Thursday.

After being forced to come from a set down to defeat Stephanie Dubois of Canada in the first round, this was a much more comfortable win for Zheng.

The Chinese star, seeded 25th, hadn't been past the Wimbledon second round since becoming the first wildcard to reach the semi-finals at the All England Club four years ago.

The 28-year-old ended that disappointing run in emphatic fashion out on Court 19 and can now look forward to only her second appearance in the last 32 of a Grand Slam since 2010.

Zheng made the perfect start with a break in the opening game of the match.

Her nerves were tested when Wozniak broke back to level at 4-4 and she passed with flying colours, breaking in the next game and serving out the set.

Zheng seized complete control of the match with two breaks in the first three games of the second set.

Although she dropped serve once herself, Zheng responded with another break and clinched the win on her fourth match point.

Comments
Topics mentioned in this article
Melinda Czink Tennis Wimbledon 2012 Stephanie Dubois Aleksandra Wozniak
Get the latest Cricket news, check out the India cricket schedule, Cricket live score . Like us on Facebook or follow us on Twitter for more sports updates. You can also download the NDTV Cricket app for Android or iOS.