Wimbledon champion Serena Williams finished the tournament on a whopping 102 aces on Saturday, after beating Agnieszka Radwanska 6-1, 5-7, 6-2 in the final. 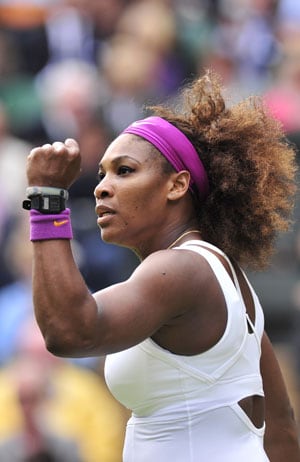 Wimbledon champion Serena Williams finished the tournament on a whopping 102 aces on Saturday, after beating Agnieszka Radwanska 6-1, 5-7, 6-2 in the final.

The 30-year-old American, who now has five Wimbledon singles titles in her 14 Grand Slam collection, also hit more aces than the leading man, Germany's Philipp Kohlschreiber who ended his campaign on 98 when he made a quarter-final exit.

The American reached the 100-ace landmark in the fourth game of the third set of the final when she served four in a row for a 'golden game'.

She had hit a record number of aces for a single match -- 24 against Victoria Azarenka in the semi-finals.

"I do that all the time now. I did it in Madrid. I think I did it earlier in this tournament," Williams said of her four-in-a-row.

"That's my latest and greatest thing to do, is hitting four aces in a game. It's awesome."

Williams said that in her younger days that she modelled her serve on compatriot Pete Sampras.

"I used to when I was younger," she added. "I used to want to serve just like Pete. But I think my motion changed. It doesn't look anything like his. But I definitely wanted to. That was the intention.

"I didn't want it to change. It just kind of became my own. It became Serena Williams."

She added: "My serve really helped me throughout this tournament. I can't describe why it was so good or how it was so good. It's not like I practice it that much. I just had the rhythm."

Comments
Topics mentioned in this article
Agnieszka Radwanska Tennis Wimbledon 2012
Get the latest updates on ICC T20 Worldcup 2022, check out the Schedule and Live Score. Like us on Facebook or follow us on Twitter for more sports updates. You can also download the NDTV Cricket app for Android or iOS.