Defending Wimbledon champion Novak Djokovic avoided another Czech Republic Centre Court ambush when he reached the last 16 with a 4-6, 6-2, 6-2, 6-2 win over veteran Radek Stepanek on Friday. 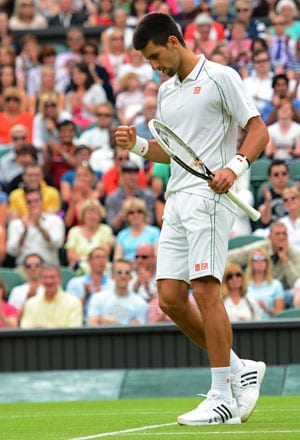 Defending Wimbledon champion Novak Djokovic avoided another Czech Republic Centre Court ambush when he reached the last 16 with a 4-6, 6-2, 6-2, 6-2 win over veteran Radek Stepanek on Friday.

Djokovic will face Serb compatriot Victor Troicki, who put out Argentine 15th seed Juan Monaco 7-5, 7-5, 6-3 for a place in the quarter-finals.

Top seed Djokovic, playing on the same court where Rafael Nadal had been stunned by world 100 Czech Lukas Rosol on Thursday, overcame dropping his first set of the tournament to see off 33-year-old Stepanek.

The Serb goes on to play compatriot Victor Troicki, who put out Argentine 15th seed Juan Monaco 7-5, 7-5, 6-3 for a place in the quarter-finals.

Troicki will be playing in his first last 16 tie at Wimbledon.

Djokovic found wily Stepanek, a quarter-finalist in 2006, hard to read in the first set as the Czech kept the champion pinned back by serving and volleying, almost an extinct technique on the slowing All England Club lawns.

But he won 18 of the next 24 games to storm to victory, taking another step closer to a sixth career Grand Slam title.

Stepanek, playing in his 10th Wimbledon, was watched by wife Nicole Vaidisova, a former world number seven, and she joined the crowd in polite bemusement when her husband was ordered to change his shoes at the start.

His bright red and blue footwear were deemed to have breached the tournament's strict predominantly white clothing and gear rule.

Instead, under the chair umpire's orders, he opted for white and green on his feet.

For the last two years, Nadal had proved a bridge too far for world number four Murray, winning semi-finals in 2010 and 2011.

Nadal had also won their quarter-final meeting in 2008.

But with Nadal out of the equation, the 25-year-old Briton can start planning realistically to become the first British finalist since Bunny Austin in 1938, even of becoming the country's first champion since Fred Perry in 1936.

Next up for Murray is Cypriot Marcos Baghdatis who beat the Scot at the All England Club in 2006.

"It's irrelevant to me unless I reach the semi-finals. I have a guy who has played in a Grand Slam final and that's my focus," he said.

"If anything the draw has opened up for Philipp Kohlschreiber. He would have been expecting to face Rafa in his next match. I face Marcos and maybe he will have a performance like Rosol."

Murray added: "I was surprised by Rafa's defeat, but from what I saw of the match, Rosol just went for rockets and came out swinging."