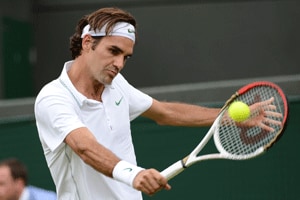 Third seed Roger Federer beat Spain's Albert Ramos 6-1, 6-1, 6-1 on Monday to reach the Wimbledon second round, taking just 79 minutes to kick off his bid for a record-equalling seventh title.

The six-time champion, and record 16-time Grand Slam title winner, will face colourful Italian Fabio Fognini for a place in the last 32.

Federer, shunted out on to Court One for his 2012 opener, fired down nine aces in his straightforward win over left-hander Ramos, the world number 43 who has never won a match on grass.

"The crowd were excited to see us play. I played a good match against a guy who doesn't have much experience on grass courts," said the Swiss.

"It was a clean match, I could save energy and it gives you confidence when you close out a match that easily."

Federer, without a Grand Slam title since the 2010 Australian Open, is bidding to equal Pete Sampras's record of seven Wimbledon titles.

But he has fallen in the quarter-finals in the last two years, losing from two sets to love up for the first time in his career in 2011 when he went down to France's Jo-Wilfried Tsonga.