Listen to the latest songs, only on JioSaavn.com
Wimbledon 2012
Sports Home
Story ProgressBack to home

Azarenka eases into second round at Wimbledon

Second-ranked Victoria Azarenka overcame a late slip-up to beat American Irina Falconi 6-1, 6-4 on Tuesday in the first round of Wimbledon. 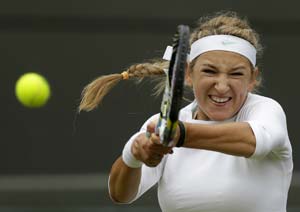 Second-ranked Victoria Azarenka overcame a late slip-up to beat American Irina Falconi 6-1, 6-4 on Tuesday in the first round of Wimbledon.

The Australian Open champion looked to be cruising towards victory when leading 4-1 in the second set but allowed Falconi to break twice and keep her chances alive. Azarenka wouldn't allow a comeback, however, converting her second match point when Falconi netted a forehand return.

Azarenka reached the semifinals at Wimbledon last year before losing to eventual champion Petra Kvitova, while Falconi lost in the first round for the second year in a row.

Comments
Topics mentioned in this article
Tennis Victoria Azarenka Irina Falconi Wimbledon 2012
Get the latest Cricket news, check out the India cricket schedule, Cricket live score . Like us on Facebook or follow us on Twitter for more sports updates. You can also download the NDTV Cricket app for Android or iOS.