Sania and Huber will now fight it out with Romania's Monica Niculescu and Czech Republic's Klara Zakopalova for a place in the semifinals. 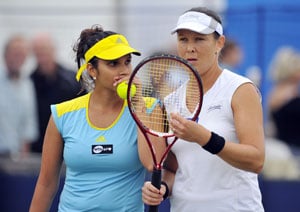 Sania Mirza and Liezel Huber were made to work hard for points as they struggled past Darija Jurak and Heather Watson to move to the quarterfinals of the WTA Aegon International, here on Wednesday.

The second seeded Indo-American pair recorded a 7-6 (4) 7-6 (3)Â  win over unseeded Czech-British combo in one hour and 36 minutes in the first round of the USD 690,000 tournament, leading to Wimbledon.

Sania and Huber will now fight it out with Romania's Monica Niculescu and Czech Republic's Klara Zakopalova for a place in the semifinals.

An early break put Sania and her partner in a comfortable position and soon they were serving for the set in the ninth game. However, they could not deliver the punch as they were down 0-40 and their rivals converted their second chance to make it 4-5 and levelled the score in the next game with a hold.

The issues was stretched to a tie-breaker and here Sania and Huber grabbed the first available opportunity to take a one-set lead.

However, Jurak and Watson refused to throw in the towel and kept fighting. They broke Huber's serve in the second game to open up a 2-0 lead in the second set.

Sania and Huber upped the ante and broke back immediately and the set was again on even terms. They had a break chance at deuce point in the seventh game but Jurak and Watson survived.

The next chance for Sania and Huber came in the 11th game and they swiftly broke the rivals at love. Now Sania was serving for the match but faltered as she began with a double fault. The Indian was broken at love, forcing a tie-breaker.

Yet again Sania and Huber proved a better team in the tie-breaker as they clinched the issue.