US Open champion Samantha Stosur suffered another Wimbledon nightmare as the Australian fifth seed crashed out in the second round on Wednesday. 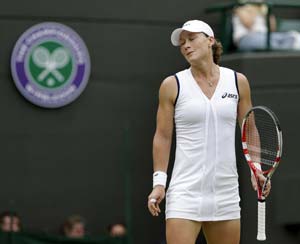 US Open champion Samantha Stosur suffered another Wimbledon nightmare as the Australian fifth seed crashed out in the second round on Wednesday.

Stosur had never been past the third round in nine previous visits to the All England Club and that miserable sequence was extended with a 6-2, 0-6, 6-4 defeat against Arantxa Rus of the Netherlands.

The 28-year-old's latest loss means there are no Australians left in either the men's or women's singles.

Lleyton Hewitt, Bernard Tomic, Matthew Ebden and Marinko Matosevic had already bowed out, which left Australia without a male player in the second round of Wimbledon for the first time since 1938.

And with Casey Dellacqua, Ashleigh Barty, Anastasia Rodionova and Jarmila Gajdosova all eliminated from the women's draw, Stosur was Australia's last woman standing.

After dropping the first set, Stosur, who beat Serena Williams in New York to win her first Grand Slam title last year, reeled off six successive games to level the match on Court One.

But she lost her rhythm in the final set and allowed the world number 72 to move 3-0 ahead.

Stosur, a 2010 French Open finalist, briefly rallied and got a break back, only to surrender her own serve again with a woefully miscued forehand.

Rus wasted two match points as she served for the win and then tamely netted a forehand on break point to give Stosur a lifeline.

But Stosur couldn't take advantage of her reprieve as Rus, who won the Australian Open junior title in 2008, showed impressive nerve to break again and seal the win.

Comments
Topics mentioned in this article
Tennis Samantha Stosur Wimbledon 2012 Arantxa Rus
Get the latest Cricket news, check out the India cricket schedule, Cricket live score . Like us on Facebook or follow us on Twitter for more sports updates. You can also download the NDTV Cricket app for Android or iOS.