Rafael Nadal survives scare to ease into Wimbledon second round

Former champion Rafael Nadal survived an early scare to kick off his bid for a third Wimbledon title with a 7-6 (7/0), 6-2, 6-3 victory over Brazil's Thomaz Bellucci in the first round on Tuesday. 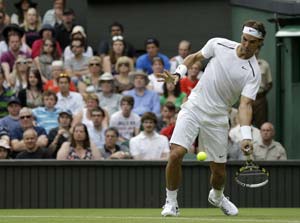 Former champion Rafael Nadal survived an early scare to kick off his bid for a third Wimbledon title with a 7-6 (7/0), 6-2, 6-3 victory over Brazil's Thomaz Bellucci in the first round on Tuesday.

Nadal, the winner in 2008 and 2010, appeared to be suffering a hangover from his record-breaking seventh French Open triumph two weeks ago as he allowed world number 80 Bellucci to race into a 4-0 lead in the first set on Centre Court.

But the second seeded Spaniard, who lost in the final to Novak Djokovic last year, quickly regained his composure to canter through to the second round.

"It's always tough to make the change from clay to grass, especially when over the last couple of months I played almost every match on tour. Physically you start having some troubles," Nadal said.

"He started well, with some good serves, and after that I had more mistakes than usual and I was very lucky to come back from 4-0.

"But I'm very happy to be back on probably the best court in the world and winning in three sets is good for me. Everytime I have the chance to play here I try to enjoy it."

Winning the opening set in a tie-break seemed to break Bellucci's resolve and, with normal service restored, Nadal powered through the second set in typically aggressive fashion.

Although Nadal is rightly regarded as the king of clay after his remarkable achievements at Roland Garros, the 11-time Grand Slam winner is fast becoming equally dominant on grass.

He has reached the final on his last five appearances at the All England Club and there was an inevitability about the way he battered his fellow left-hander into submission.

Bellucci stuck with him until midway through the third set when a booming Nadal forehand secured a break for a 4-2 lead and the Spaniard was soon serving out the win.

The 26-year-old, bidding to equal Bjorn Borg's feat of winning the French Open and Wimbledon back to back on three occasions, will face Ivan Dodig or Lukas Rosol for a place in the last 32.

Comments
Topics mentioned in this article
Tennis Wimbledon 2012 Barcelona Fernando Verdasco Rafael Nadal Rohan Bopanna Thomaz Bellucci
Get the latest Cricket news, check out the India cricket schedule, Cricket live score . Like us on Facebook or follow us on Twitter for more sports updates. You can also download the NDTV Cricket app for Android or iOS.