Venus and Serena Williams became the first tennis players to win four Olympic golds on Sunday after a 6-4, 6-4 victory over Czech pair Andrea Hlavackova and Lucie Hradecka in the women's doubles final at Wimbledon. 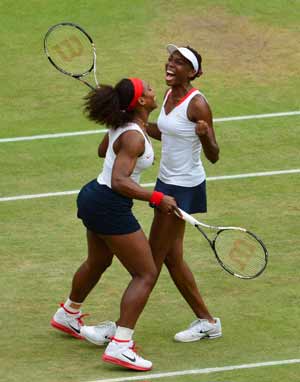 Venus and Serena Williams became the first tennis players to win four Olympic golds on Sunday after a 6-4, 6-4 victory over Czech pair Andrea Hlavackova and Lucie Hradecka in the women's doubles final at Wimbledon.

The Williams sisters had already won doubles gold at the Sydney Games in 2000 and in Beijing in 2008, while Venus claimed the singles gold in Sydney and Serena won her first individual gold on Saturday, when she crushed Maria Sharapova in the women's final.

Venus and Serena also joined Spain's Conchita Martinez, who won silver in 1992 and 2004 and bronze in 1996, as the only tennis players to win medals at three different Olympics.

"It was so exciting to win the singles, but like I said at the beginning of the tournament my goal was to get gold in doubles here," Serena said.

"There's something about standing next to Venus and holding that gold medal.

Venus added: "It's incredible. After coming off Serena's victory I think most of all we are happy to add to our country's medal count and be a part of it.

"It just feels unreal. I would say this is more special than (when she won) Wimbledon.

"We're definitely planning on playing at the Rio Games (in 2016). We're going out with a bang in Rio. Hopefully we will make it four, you never know."

As well as dominating for over a decade on the singles tour, Venus and Serena are a formidable doubles team -- they have won 13 Grand Slam doubles titles as well as their three Olympic golds -- and they were just too strong for the Czechs in a match played under the Centre Court roof due to rain.

Hlavackova and Hradecka won their first Grand Slam title at the French Open earlier this year and had dropped just one set en route to the Olympic final.

But Venus and Serena's record against the Czech fourth seeds -- they had won all four meetings including the Wimbledon final last month -- hardly suggested an upset was on the cards.

The American sisters made an ominous opening as they broke in the first game of the match.

Hlavackova and Hradecka battled gamely to get back in the match, but Venus and Serena saved a break point at 5-4 to take the set.

Nothing was going to stop the sisters claiming their record haul of golds and they landed the decisive break in the fifth game of the second set.

It was left to Serena to close out the win. With her serve so deadly at present, the result was never in doubt and the sisters were soon hugging in triumph.

Comments
Topics mentioned in this article
Olympics 2012 Elena Vesnina Wimbledon 2012 Lucie Safarova Petra Kvitova Francesca Schiavone Maria Sharapova Sania Mirza Tennis Venus Williams
Get the latest updates on ICC T20 Worldcup 2022 and CWG 2022 check out the Schedule, Live Score and Medals Tally. Like us on Facebook or follow us on Twitter for more sports updates. You can also download the NDTV Cricket app for Android or iOS.