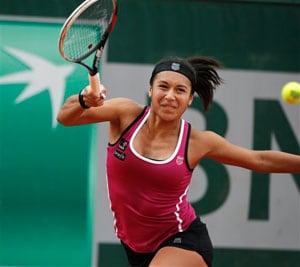 Heather Watson, making her way back gingerly after a bout of glandular fever, slid out of the French Open on Wednesday in losing her opening round match against Stefanie Voegele.

Switzerland's Voegele won 6-4, 2-6, 6-4 to send Watson crashing out at the opening hurdle and at the same time end British hopes, male or female, in this year's tournament given Andy Murray's absence from the men's event.

After trading opening serves, Watson then let slip three straight games and was thereafter chasing the encounter and although she rallied and broke back she succumbed to lose the opening set in 38min.

The Guernsey-born Briton bagged an early break in the second, then conceded but racked up a four-game streak to level the contest.

However, a dropped serve at the start of the decider had her back on the rack.

Games went with serve thereafter as Voegele served out to love to win the match as Watson netted a crosscourt backhand return.

This year marks the first time in six years that no British player has reached the second round in Paris.

British women have, in recent decades, shown scant affinity with Parisian clay -- Sue Barker was the last to lift the singles crown in 1976 while Fred Perry was the last British male champion back in 1935.