Novak Djokovic delighted fans in Beijing on Sunday with a rendition of the famed horse-riding dance from South Korean pop hit "Gangnam Style" after defeating Jo-Wilfried Tsonga to win his third China Open. 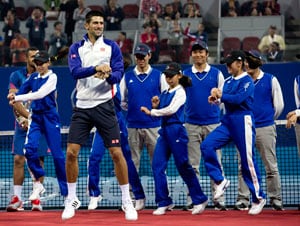 Novak Djokovic delighted fans in Beijing on Sunday with a rendition of the famed horse-riding dance from South Korean pop hit "Gangnam Style" after defeating Jo-Wilfried Tsonga to win his third China Open.

The 25-year-old Serb beat France's Tsonga in straight sets to win the $2.2 million event and then fulfilled a promise made earlier in the week to copy the moves to the Internet sensation by South Korean rapper Psy.

Djokovic, world number two, looked nervous and reluctant at first following the request by the tournament's compere, but soon strutted his stuff along with several ball-boys and girls in front of the crowd of around 10,000.

"Nothing was planned," Djokovic said.

"I was talking to fans who suggested to me to do that dance at the end of the tournament in case I win.

"So I had to hold my promise, and it was fun. I think it was obvious that I was the worst dancer there out of the small group, but it still was quite a lot of fun," he added.

The video to "Gangnam Style", featuring Psy's much-imitated dance, went viral after its July release on YouTube, where it has notched up more than 390 million views.

Almost overnight, Psy was transformed into South Korea's best-known cultural export, succeeding where the manufactured girl and boy bands of the homegrown "K-pop" phenomenon have failed, by breaking into the US market.

Despite being sung almost entirely in Korean, the song has topped the British charts and reached number two on the US Billboard's Hot 100 chart.

Comments
Topics mentioned in this article
Tennis Novak Djokovic Wimbledon 2012
Get the latest updates on IPL 2021, check out the IPL 2021 Schedule and Indian Premier League Live Score . Like us on Facebook or follow us on Twitter for more sports updates. You can also download the NDTV Cricket app for Android or iOS.